No arrests made as DEA closes Toro marijuana bust investigation

3,000 pounds of marijuana believed to have come from Mexico

The investigation into $3 million of marijuana found at a Toro plant in Plymouth has been closed with no arrests, federal drug officials said this week. 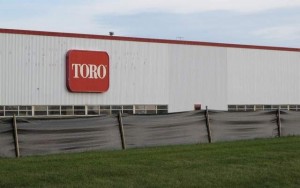 The U.S. Drug Enforcement Administration spearheaded the investigation that began Oct. 28 when employees at the plant discovered 3,000 pounds of marijuana stashed alongside parts in large shipping crates, police said. The drugs were spread across several containers that were large enough that they were moved by freight rather than mail.

“We did our usual exhaustive investigation, and it was with the full cooperation of Toro, but we won’t be making any arrests at this point,” Bohn said. “Ultimately, we were unable to identify the individual source of the 3,000 pounds.”

The drug seizure was easily the largest in Sheboygan County history, according to the Sheboygan County Multi-Jurisdictional Drug Enforcement Group, the county drug unit, which aided in the investigation.

Bohn said the drug seizure was unusual in size but not in method.

“It’s not unusual for these drug-trafficking organizations to employ a variety of techniques to get drugs up here into the United States and to take great pains to secrete it from law enforcement,” he said. “These large organizations often compartmentalize themselves, so it can be hard to backtrack.”

Bohn said the investigation is “pretty much closed” at this point but may be reopened in the future.

“It doesn’t mean that years from now we might not get a tip on something or some information we have might tie into something,” he said.