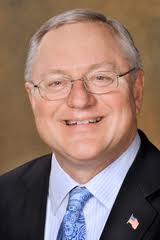 I bet he takes enough kickbacks for everyone……-UA

If an elected official misses the point, is his statement still right? State Sen. Rick Jones, R-Grand Ledge, was right when he said that he didn’t “think it’s appropriate to offer any enticement to vote for or against elected officials of any kind.” Unfortunately, the subject he was talking about had nothing to do with enticing voters.

Jones, outraged by this display of businesses enabling people to vote, contacted the state attorney general to determine the legality of the clinic’s offer.

There’s more than a passing thought that, if this wasn’t medical marijuana, there would be no issue here. State officials would feel no need to get involved, and a business would not be lampooned for attempting to help eligible voters vote. But because medical marijuana is a touchy subject that can easily be misconstrued, it’s an issue.

But it’s good for local businesses to support voter registration. Businesses investing in communities, not just customers, is the hope of local governments everywhere. Another business might be lauded for making this effort. To follow the senator’s example, there would be no issue if a bar offered free drinks to customers who submitted their voter registration forms there.

Second, it’s the clinic’s choice if it wants to support the election of officials who further its cause. Other businesses do that all the time: It’s called hiring lobbyists. In this case, clinic patients can submit a voter registration form and proclaim that there is no way they will ever vote for the candidates the clinic supports and still be entitled to free medical marijuana.

The decision by the clinic to support candidates and it’s decision to offer free, legal medical marijuana to individuals who submit a voter registration form are separate decisions ­— decisions that perhaps are motivated by the same interests, but separate decisions nonetheless.

It’s easy to ignore those distinctions and accuse the clinic of impropriety, but technically the clinic is in the right. The issues are separated, even if the line between them is thin. And if this isn’t right, then a candidate for an elected position who promises lower taxes isn’t in the right either, because he’s promising voters a reward if he gets elected.

So the senator is correct; it’s absolutely inappropriate for a business (or a candidate, or an individual) to offer any kind of enticements in exchange for votes. Fortunately, that never happened in the above scenario.

There is a line between support and explicit coercion, and it was not crossed this time.