Obama Says Drug Users Must Be Treated as Criminals

Remind me why everyone was so excited for him? -UA 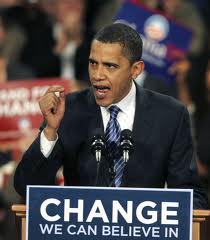 The explosive debate over drug policy in America is now so impossible to ignore that even the president is often forced to comment on it. His typical script about emphasizing a public health approach with an increased focus on treatment and prevention has become quite familiar to those following the issue.

It should come as no surprise, therefore, that the topic arose yet again during a town hall at the University of Maryland on Friday.
“Much is being asked of our generation,” a doctoral student named Steve told the president at a town hall event in Maryland. “So, when are our economic perspectives going to be addressed? For example, when is the war on drugs in society going to be abandoned and be replaced by a more sophisticated and cost effective program of rehabilitation such as the one in Portugal?” [Raw Story]

Predictably, the president’s response began by calling for “an approach that emphasizes prevention, treatment, a public health model for reducing drug use in our country.” He understands, of course, that the brutal violence of the drug trade will continue as long as lots of people keep buying lots of drugs. But Obama’s response then took a turn that, upon reflection, should raise doubts about his willingness to reform our nation’s notoriously harsh handling of drug users in any meaningful way:

“Just to make sure that I’m actually answering your question, am I willing to pursue a decriminalization strategy as an approach? No.”

Whatever else the president has had to say about taking a balanced approach and setting smart priorities, the bottom line is this: if you take a firm stance against decriminalization, you are declaring that drug users must continue to be treated as criminals. It may or may not be Obama’s intention to say this, but it’s the only meaning that can reasonably be attached to his words.

You cannot present yourself as a proponent of a public health approach while simultaneously advocating the aggressive pursuit, arrest, and imprisonment of people who might need help with a health problem. One need not come out as a supporter of marijuana legalization to acknowledge that slapping handcuffs on casual users, throwing them in jail, and branding them with criminal records is an approach we’ve already tried several million times too many. When you defend the continued criminalization of drug use, you render yourself an apologist for every dreadful consequence that follows as the crushing weight of the criminal justice system demolishes so much of what it touches.

Really, what is the point of speaking with seeming seriousness about moving beyond the drug war’s ugly legacy of strong-arm solutions, only to turn around and flatly dismiss the notion of no longer criminalizing our friends and neighbors? Try as he might to walk a fine line between addressing growing public frustration and adhering to antiquated drug war politics, the president has ultimately become an advocate of nothing more than an incoherent and internally contradictory collection of cookie-cutter catch phrases that serve only to distract us while every problem with our drug policy gets worse under his watch.