Make your own choices, and mind your own damn business. -UA 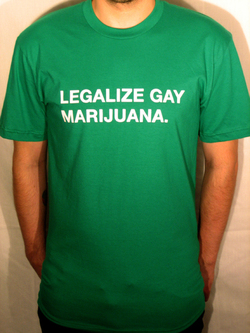 DENVER (AP) — Colorado’s position as a key battleground state in the 2012 presidential race comes with a wrinkle neither party seems to like: A freewheeling ballot initiative tradition that could put both legalizing marijuana and gay marriage before voters on Election Day next year.

Marijuana activists have begun gathering signatures to ask voters to allow pot for recreational use, a direct challenge to federal drug law. And gay-marriage advocates were cleared last week to start petitioning for a repeal of a state constitutional ban on same-sex marriage approved just five years ago.

Proponents of both measures still must get enough signatures before the questions go to ballots. But Colorado’s lowest-in-the-nation proportional signature threshold, now at about 86,000, combined with the fact there are no statewide races aside from the presidential contest next year, mean hot-button social questions could complicate the plans of both parties.

“Both of these are going to gain some national attention given the nature of the issues,” said Robert Hazan, a political scientist at Metropolitan State College of Denver. “Colorado has both a growing progressive and a growing conservative organization, so it will be a battleground not just presidentially. We’ll see ideological forces clashing.”

Democrats and Republicans aren’t publicly talking about what Colorado’s ballot proposals mean for next year’s race. State GOP Chairman Ryan Call didn’t respond to a question about the matter, and Democratic Party Chairman Rick Palacio didn’t mention either marijuana or marriage in a written statement.

“Democrats have several high priorities. Adding high-profile ballot initiatives to that mix will be very tough to do, no matter the issue,” he wrote.

However, both Call and Palacio have repeatedly said Colorado is a must-win for President Barack Obama.

In 2008, Colorado crowned one of Democrats’ biggest achievements in more than a decade — cracking the GOP’s lock on the interior West.

Democrats chose Denver for their national convention and went on to carry Colorado for the first time since 1992. Democrats also picked up Nevada and New Mexico. Obama’s largest political rally before winning office took place in Denver, and he chose Denver to backdrop his first big move in office — signing the massive economic stimulus law in early 2009.

Both parties say Colorado is a consummate purple state whose political importance is belied by its small size. Already, left- and right-leaning advocacy groups have bought television ads supporting or attacking Obama.

While Obama and his Republican challenger are certain to fight mightily for Colorado, what’s less clear is whether marijuana and gay marriage on the ballot could distract voters. Colorado has a history of eyebrow-raising ballot measures, with unclear results for either party.

One of the sponsors of this year’s pot measure is Mason Tvert, who also organized the unsuccessful 2006 legalization question. He said marijuana certainly brings young people to the polls, but he argued it’s impossible to say how new voters drawn by the pot question affect other races.

“They can be Libertarians or Greens or everything in between,” Tvert said. “I don’t think you can say it helps or hurts either side.”

A sponsor of the gay-marriage amendment was even more cautious about how his measure could affect a tight presidential contest. Gay-marriage ballot questions were credited for boosting conservative turnout in the 2000s, but Mark Olmstead said a repeal measure may not bring the same heat next year.

“Presidential races bring a lot of attention, and there’s really nothing else that can beat that,” Olmstead said.

California’s unsuccessful marijuana-legalization question last year offers few clues. Even without being upstaged by a presidential race, California’s 2010 measure didn’t appear to win any races for either Republicans or Democrats, said Corey Cook, a political scientist at the University of San Francisco.

“There was talk originally that (the pot question) would be good for Democrats because it would drive young people to the polls, but there was no evidence it really affected the outcome of any races,” Cook said.

Another California analyst, political scientist John Pitney at Claremont McKenna College, predicted that a potential pot question next year in Colorado would hardly distract voters from a knock-down presidential fight. But he wasn’t ready to give the Colorado pot question no chance.