The original caption under the picture said this was mold……its not. I say they drop the cultivation of marijuana charges and charge him with harboring spider mites, that is the real crime…..-UA 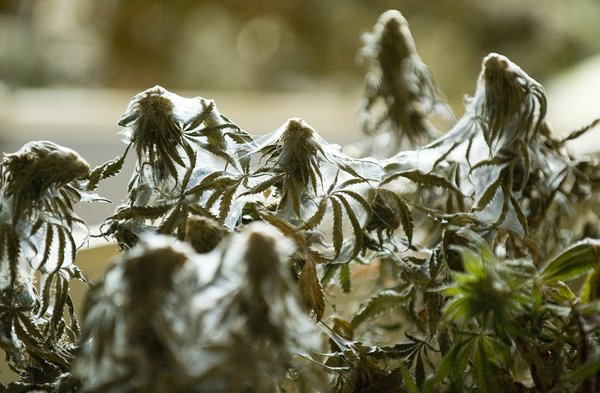 The pair of two-story beige houses with perfectly draped white curtains and manicured lawns in the Sunnyside neighborhood belied the illegal drug production that occurred inside.

The Clark-Skamania Drug Task Force on Tuesday found 839 live marijuana plants with an estimated value of $1.3 million inside a nearly 4,000-square-foot home at 9915 N.E. 104th St.

And in a related raid on Tuesday afternoon, task force detectives said they arrested 38-year-old Sal Sok after he fled a similar home at 10101 N.E. 86th Court in the same neighborhood. Police said they found at least six or seven hundred more pot plants, worth several hundred thousand dollars, growing upstairs in the second home.

Sok, who lives in Ridgefield, was arrested on suspicion of manufacturing marijuana and diverting electricity around a meter, said Sgt. Pat Moore with the drug task force.

Moore said task force detectives went to the second house about 3 p.m., at first with no search warrant, and knocked on the door, but no one answered.

Minutes later, a neighbor called 911 to say a man was running through backyards and over fences. Sheriff’s deputies took positions around the area and, with the help of a tracking dog, took Sok into custody.

Also at the second home, detectives could see stains on roof tiles that were indicative of moisture seeping from a large marijuana grow. Working with a Clark Public Utilities employee, they determined that someone had diverted power around the meter outside.

The seepage and power theft, combined with other evidence, were enough for detectives to obtain a warrant to search the second home on Tuesday evening.

They said they had no idea marijuana was being grown in the home, but they had thought it odd that someone occasionally would go inside, then leave and be gone for long periods of time.

The house is in an area of newer homes, all similar looking, in a mazelike residential area on a dead-end street.

Tuesday’s discovery is an example of a nationwide trend in illegal marijuana grows in which growers hide their cultivation operations in large houses in affluent neighborhoods, said Mike Cooke, the task force’s commander. The expansive square footage provides plenty of space for cultivation, while the nicer neighborhoods may help to deflect suspicion of illegal activity.

“If you think of a house as a greenhouse, the bigger the house, the more plants you can grow,” Cooke said. “That could be the trend because there is more space to grow. There also could be that element of hiding in plain sight.”

A crew from the task force cleaned out both homes Tuesday and confiscated plants and other evidence as shocked residents watched from the sidewalk.

“We have barbecues and things and hang out, but we never saw any traffic there,” said neighbor Fanny Smith.

Growers had turned every corner of the houses’ second floors into sophisticated greenhouses.

Bedrooms and even walk-in closets were set up with expensive equipment such as grow lights, water pumps, charcoal filters, fans, timers, venting pipes and nutrient-packed grow cubes, which resemble Styrofoam and substitute for soil. The plants in one of the bedrooms were completely molded, possibly due to inadequate ventilation.

With doors open, the pungent smell of the operation wafted out to the street, where neighbors could smell it.

In the second home, large air pipes were fitted with carbon filters, about one foot in diameter, and the air then was piped up to vent as high as possible to lessen the smell of growing marijuana that neighbors might notice, Moore said.

There was extensive heavy electrical wiring visible, and a large number of good-sized electrical ballasts, upstairs to power and control the equipment.

In one of seven grow rooms, tops of marijuana plants were hung upside down to allow more of the sap to flow into the valuable buds.

Most plants were being grown without soil, using liquid chemical fertilizers that flowed to grow cubes of various sizes. The grow lights were fitted with timers and reflective shields.

The first floors were used as a front for the operation, a picture of domestic perfection, in case someone peeked inside. In fact, no one lived in the residences, Cooke said.

“I have grandchildren,” Smith said. “They play around in the neighborhood. To know something like this is happening is terrible, and the fact that the people don’t even live here, that’s what gets me mad.”

The property at 9915 N.E. 104th St is valued at more than $300,000 and is owned by Josephine Mims of North Las Vegas, Nev. She apparently leased the home to someone else, police said.

Cooke said it’s sometimes difficult to discover connections between separate grows, as growers are constantly switching homes and the names of PUD subscribers.

Cooke would not say how police became aware of the grow.