State’s marijuana law not paying off

POLICE: COLLECTING FINES NOT SO EASY

Maybe the cops will finally get our message: WE ARE DONE WITH PROHIBITION. Decrim and prohibition do not work. THERE IS NO MORE MARIJUANA MONEY FOR YOU COPS! GO FIND RAPISTS, GANG MEMBERS AND THIEVES! -UA 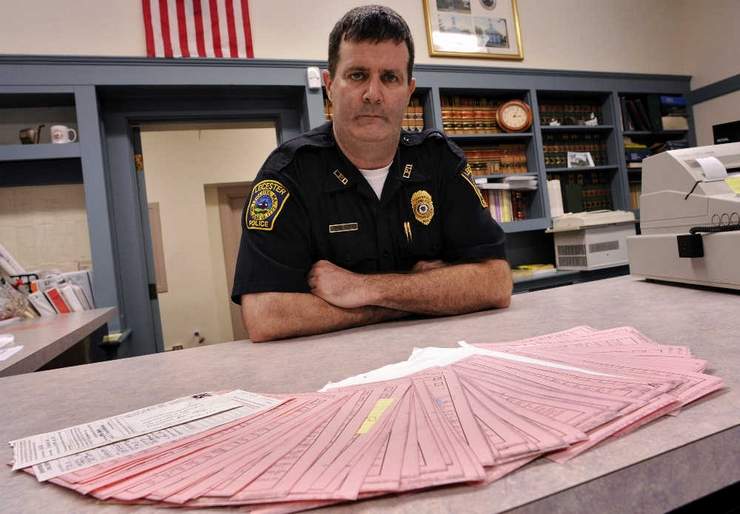 The money is actually in the form of 126 unpaid citations levied on people fined for being caught with less than an ounce of marijuana. Two of the citations were written by state police, with Leicester officers issuing the other 124.

Ever since voters passed a referendum in 2008 that made possession of less than one ounce of marijuana a civil offense, police continue to complain about the law not having enough teeth to enforce it and collect the fines.

“We’ve lost money on every single one of those citations,” Leicester Police Chief James J. Hurley said of the stack of unpaid citations. “One of the things that the Question Two proponents were selling at the time was that this was going to bring money into the towns.”

The ballot measure, passed in November 2008 does not force offenders to identify themselves to police, nor does it enforce a way to pay fines. Officials say it leaves them without any way to collect the $100 citations. Printing and processing the citations comes at a cost upfront, Chief Hurley said. His department has laid off eight part-time officers, returned software and gotten rid of a leased motorcycle for patrol. He just took a 2 percent budget cut. The citation money could have helped, he said.

It may be funny when voters write-in Mickey Mouse and Superman for town moderator. It is less so when those are the kind of names people give police.

“Joe Blow, Yogi Bear, there are a number of different names chiefs have citations written out for,” Massachusetts Chiefs of Police Association executive director A. Wayne Sampson said. “I heard chiefs complaining they weren’t getting any results, especially when they knew somebody gave them a false name.”

The statistics show state police issued the majority of the citations in the city, with 36. Worcester State University Police follow next with 13, and Worcester Police have issued 8. One citation did not have an agency listed.

Several departments say they don’t see a lot of fake names. Officers tend to know people in town. The biggest problem is collecting the cash.

“There is no mechanism in place for collecting the fine,” Worcester Police spokesman Sgt. Kerry F. Hazelhurst said. “That is where the problem lies. It is hard to enforce when there are loopholes in the law that hinders collection of the fines.”

Dudley police have issued 22 citations from Dec. 1, 2010, to June 16, 2011, and so far 14 have been paid. With police department budgets tight across the state, any extra cash is needed, especially when the person was cited for the violation, Dudley Police Chief Steven J. Wojnar said.

Fines for not paying for a dog license could end up in court, and someone could have a warrant issued for nonpayment, the chief noted. It is not the case for the marijuana citation.

“It would have been better if the law was stepped back and the kinks worked out,” Chief Wojnar said.

Having people deny identifying themselves to police is hard to believe for lawyer Steven Epstein, spokesman for the Massachusetts Cannabis Reform Coalition. Police carry a badge, baton and gun, and most people aren’t going to say no, he said.

“Someone who has that equipment on is going to get your name,” he said. “Will some people be sharp enough to give a fake name? Sure.”

In some cases, someone carrying less than an ounce of pot are committing some other crime or driving offense. In those instances, police can retrieve the person’s name anyway.

Getting people to pay the fines is simple, Mr. Epstein said; just take them to small claims court.

With most civil citations, such as speeding tickets or parking violations, police can levy criminal charges or driver’s licenses and car registrations cannot be renewed. That isn’t an option for the marijuana citation.

There is a price that comes with taking someone to small claims court. Add the cost of having an officer in the court for the case, and municipalities will pay more than what they get back in the $100 citation, police said.

Chief Hurley said his department is working with Western Worcester District Court in East Brookfield to see if an exemption stipulation applies to the town.

There is a bill filed with the state Senate involving the decriminalization of minor offenses that would allow police to better enforce the marijuana citations, said Mr. Sampson. The police chiefs group has supportedthe bill, which has received backing from multiple state legislators.

The bill was not proposed solely because of the marijuana citations, but was filed more for civil infractions, and lessening overcrowding and court costs statewide.

Sen. Michael O. Moore, D-Millbury, a backer of the bill, which will be heard Wednesday by the the Joint Committee on Municipalities and Regional Government, said the bill would give officers the discretion on minor offenses to chose between issuing a civil infraction, or using court action.

The bill would save communities money, as well as the state. It costs money for prosecutors and state-appointed attorneys when someone is brought to court, he said. Court staff also has to process the case.

Chief Hurley doesn’t believe voters understood all the nuances of the referendum before it passed.

“I can’t believe voters knew they were getting into this quagmire,” he said. “It you’re going to pass a law and ask law enforcement agencies to enforce it, then make the law enforceable.”