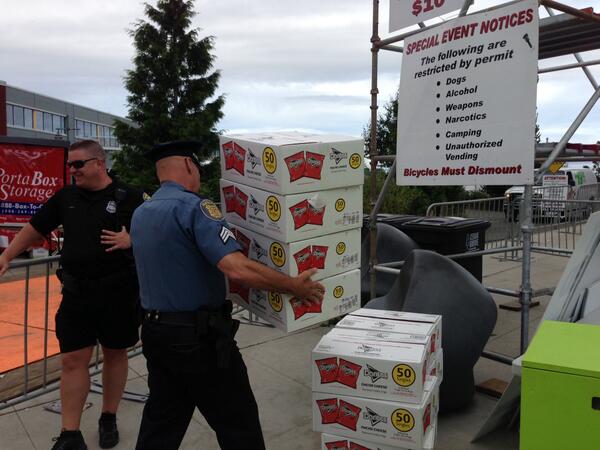 Police shut down several booths at Tacoma Hempfest on Saturday, angering vendors who said they were following the rules of city permits while selling items that head shops usually sell without hassle.

Sources tell Releaf  that the Tacoma police were paid $7,000 to ‘keep the peace,’ instead they took the pieces……..-UA 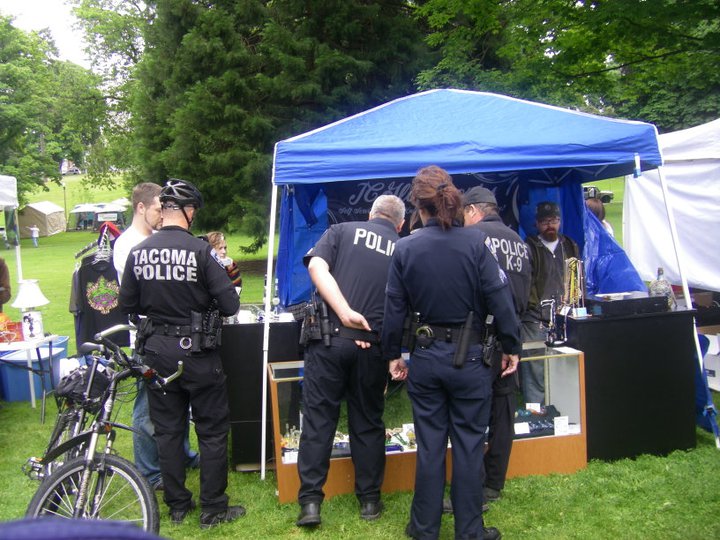 Police shut down several Tacoma Hempfest booths Saturday, angering vendors who said they were following the rules of city permits while offering items that head shops usually sell without hassle.

Officers arrived as booths were set up for the marijuana-themed festival in Wright Park. They handed out 13 tickets for drug paraphernalia and marijuana possession to vendors, police said, and seized pipes and bongs as evidence.

“They’re picking on us. They don’t want Hempfest back,” organizer Cat Jeter said, calling the ticketed vendors “people who operate in the light of day in this city every single day.”

There was no similar crackdown at last year’s inaugural Hempfest, she said.

Tacoma Police Capt. Jim Howatson said permits spelled out that no paraphernalia was allowed. Other vendors were cited for having marijuana brownies, he said.

“I think people see it as gray,” Howatson said of laws in a state that allows the medicinal use of marijuana. “However, the law hasn’t been changed. The law still says that selling marijuana is illegal, that selling paraphernalia is illegal.”

Vendors were not arrested. Separately, four people at Hempfest were taken into custody on charges of public fighting and domestic violence.

Tacoma attorney Jay Berneburg said he will sue the city Monday on behalf of Hempfest and vendors. He called it illegal search and seizure.

“We’ve got tons of film, tons of photographs, hundreds of witnesses,” he said.

Police had expected about 5,000 people to show up. While here and there attendees could be seen lighting up in the park – which is against the law no matter what’s in the cigarettes – organizers tried to stop people from smoking.

Instead, the second annual event was supposed to be about building support for legalizing marijuana, spreading information about the uses of the drug and showcasing local art.

At The Hippie House booth, police handed out a charge of drug-paraphernalia possession, which is illegal if police can prove an item’s connection to illegal drugs.

Owners of the Sixth Avenue head shop kept tables out but hid most of their wares away from view and sold quietly while watching for periodic police sweeps. Some other vendors of glassware packed up and left.

Hippie House co-owner Justin Stieglitz, who said his shop had paid $800 for the spot at the festival, said police confiscated items including two glass pipes, incense and a button.

“They told me if they came back, they would take all my inventory and they would arrest me,” Stieglitz said. “I was dumbfounded.”

Activists were out in force at Hempfest, collecting signatures for a statewide drive to legalize marijuana possession and a local ballot measure that would make marijuana-related offenses “the lowest enforcement priority of the City of Tacoma.”

The local measure turned in more than 4,000 signatures Friday, with more on the way. Referendum 1, modeled after a Seattle law, needs 3,858 of them to be valid and faces a deadline of July 5 to put the measure on the Nov. 8 ballot.

A 32-foot Southwind Storm motor home dubbed the CannaBus served as the command center for Initiative 1149, the statewide legalization initiative. Kelso medical-marijuana patient Mimi Meiwes is piloting the RV around the state.

Meiwes said signature gatherers for I-1149 added more than 2,000 names to their petitions Saturday.

People became more enthusiastic as word got around about the police crackdown, she said.

“That’s when the signatures picked up,” Meiwes said.

It could be too little, too late: The initiative faces a July 8 deadline, and its website says it has 56,111 signatures ready to turn in, less than one-quarter of what it needs to make the November ballot.

The effort by the group Sensible Washington has never been well-funded – although Meiwes said enough money has been raised to for the first time start paying small amounts to people who bring in signatures. It hasn’t hired professional signature gatherers, as nearly all successful ballot campaigns do.

As the 2011 proposal’s fate is decided, work has begun on a 2012 statewide ballot measure that has more establishment support behind it and could have much more money. Backed by Seattle City Attorney Pete Holmes and former Bush administration federal prosecutor John McKay, it would allow licensed sellers of marijuana to do business.

Washington law allows for marijuana possession by people with certain illnesses who have a doctor’s authorization. But the law doesn’t provide for a legal way to get it, other than growing it privately. A new law that takes effect next month makes some changes, but Gov. Chris Gregoire removed the parts that would have specifically legalized and licensed dispensaries, leaving Tacoma and other cities scrambling to decide what to do about storefront marijuana sales

Have a very hempy day.