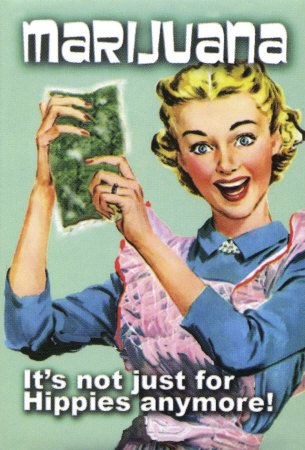 Erica, a resident of the trendy DUMBO neighborhood, is just like any other busy Brooklyn mom with a small child, juggling play dates, naptime, temper tantrums and PB&Js. The difference: She counters the daily chaos by lighting up a joint.

“I think it’s a pretty common thing,” confesses 33-year-old Erica (not her real name), mother to a 4-year-old daughter. “That’s how some mommies cope with stress.”

Motherhood, a famously competitive sport in this city — especially in the tonier neighborhoods of Brooklyn — seems to be sending increasing numbers of stressed-out women bong-ward. As marijuana grows in acceptance (it was just decriminalized in neighboring Connecticut earlier this month, and is legal for medicinal purposes in 16 states and in Washington, DC), the leafy green drug is becoming a hipper alternative to that old standby, alcohol.

“Some moms are drinking very early in the day, starting around 4,” says Erica, who says she isn’t a fan of getting plastered. “I would rather smoke a bowl, take the edge off and go about my day.”

Whenever the mood strikes when she’s home — “I don’t travel with it,” she says — she’ll take a hit or two and transform into Mellow Mom. “When you’re smoking, you’re on a different level,” she says. “Things don’t frustrate you as much.”

According to the most recent data, released in 2009 by the US Department of Health and Human Services, 16.7 million people over the age of 12 smoked pot at least once in the month prior to taking the survey, up 8 percent from the previous year. But the taboo of lighting up a joint when you’re a mom — especially with young children — persists, which is why the practice is still deeply under the radar; all of the mothers The Post spoke with did so on the condition of anonymity.

“I’ve never talked about it with my new-mom friends,” says Jennifer*, a Kensington, Brooklyn-based mother of a 1-year-old son, who is in her 30s. “I would never. I feel like the mom community is so judgmental. I would never broach that topic with anybody. I’m private about it.”

She enjoys a joint a couple of times a week, after work or on the weekends — sometimes after her son has gone to bed, and sometimes during the day, when he’s awake.

The pot, she says, makes mom-and-baby time a whole different thing. “I have had moments where I felt like I could communicate with him better, back when he wasn’t talking — we’d have a silent, eye-contact kind of conversation,” she says.

“Marijuana has aspects of euphoria and relaxation,” agrees Nancy*, a Park Slope mom of two young boys. “It can help you look at your kids in a more positive light.”

No one agrees with that sentiment more than Moms for Marijuana, an official group for Mary Jane-loving mothers.

“The New York [state] chapter is just getting off the ground,” says Sarah Via, the organization’s communications director, a 50-year-old mother of two grown children (22 and 19) who’s been smoking for 30 years and lives in the upstate town of Hamlin. There’s no NYC-based group at this time, she says, but “we’re hoping.” The state chapter, which launched earlier this year, has fewer than 100 members, but “that will change soon,” says Via, who’s planning on launching a Facebook page for the group to recruit more moms, as many other states’ branches already have.

“There are an awful lot of moms I know of who smoke,” says Via. “I would never personally advocate that someone smoke in front of their young children, but I definitely think there are so many pluses, as far as stress [relief].”

One of the group’s platforms is that marijuana is highly preferable to booze — the mommy’s traditional go-to — because, they say, it doesn’t come with the negative behavioral side effects. A similar group, the Colorado-based Women’s Marijuana Movement, outlines these points on its Web site, citing studies from American Scientist and the US Centers for Disease Control: “Marijuana is far less toxic than alcohol. Long-term marijuana use is far less harmful than long-term alcohol use.”

A study by the National Institute on Drug Abuse last year echoed these claims, although the Office of National Drug Control Policy says alcohol is safer, partly because its effects last only a few hours, while THC, the intoxicant in pot, can stay in the body for weeks.

Dr. Howard Samuels, CEO of the Hills Treatment Center in Los Angeles, says pot can also be more dangerous because it doesn’t have the slow ramping-up option of a single glass of wine.

“You smoke marijuana, you get high,” he says. “There’s a difference. If you have one glass of wine or beer, it reduces a little anxiety. But you could drive — you’re not impaired. When smoking marijuana, you smoke it to get loaded.”

Either way, though, Dr. Samuels says smoking pot and parenting don’t mix. “I’m shocked that any parent would ever say that smoking pot while they’re playing with their kids is a healthy thing,” he says. “It makes me sick to my stomach. Are they retarded emotionally?”

But many moms insist that pot makes them feel less volatile than alcohol. “Wine drinking is fun,” says April Garland, 40, a new member of Moms for Marjiuana who lives in Burt, NY, and is mother to two daughters, 7 and 13. “But you tend to lose more inhibitions. People also tend to get more aggressive when they’re drinking.”

Chris Goldstein, member of the board of directors of the New Jersey branch of NORML (National Organization for the Reform of Marijuana Laws), says he hears about this shift away from alcohol, too.

“A lot of moms are telling us they’re not drinking anymore — that they’re replacing it with marijuana,” says Goldstein, who also theorizes that mothers are moving away from dependence on pharmaceutical anti-anxiety meds, with their various side effects, and toward a more organic means of mediating stress.

“I think,” he says, “mothers are getting a little more attuned to the self-medicating aspect [of pot]. People can enjoy it in both capacities — they can enjoy the same bag of marijuana as recreation, but they can also medicate with it.”

For these moms, the unknown dangers of prescription medication for anxiety — the modern-day version of Mother’s Little Helpers, like Xanax and Klonopin — are greater than the perceived risks associated with pot. “Marijuana has far fewer [health] ramifications than many prescription drugs on the market,” claims Nancy.

Goldstein says pot is also helping some mothers to be less, well, bitchy: “A lot of moms are using it today because there’s a lot of good evidence of marijuana helping with PMS!”

All that said, it’s still illegal here. And a new report finds arrests for marijuana are up; more than 50,000 arrests were made in New York City in 2010 for possession of a small amount (less than 25 grams) of pot — perhaps explaining why so many local moms were reluctant to talk to The Post for this story.

Mayor Michael Bloomberg’s aide Frank Barry has commented that the city’s “data shows an inextricable link between drugs and crime, and marijuana is the most prevalent drug used by criminals.”

Undeterred, Via envisions opening a New York City chapter of Moms for Marijuana eventually. “The problem we’re having with [opening a chapter in] New York is the way cops are getting with marijuana arrests,” she says. “I’ve asked around, and there is apparently a very real reason for laying low in New York City.”

But these mothers, who get high while laying low, say parenting is a tough job, and insist the mellowing effects of pot make it easier to get into a childlike state — to see where your kids are coming from. “We have so much fun,” says Jennifer (who stresses that she would never get behind the wheel of a car while under the influence). “We read books and play and joke around and giggle.”

And, she says, in earlier days, pot was a welcome relief from the monotony of parenting a newborn.

“When they’re first born, they sleep all the time, and you have to be home and you can’t go anywhere,” points out Jennifer, who’s been smoking since she was in college — but says that the pot she gets from a local dealer these days is way stronger than it was 20 years ago. “Everything is so hydroponic and new and improved!”

“Kids are going to push your buttons,” Erica adds — so why not counter that with pot?

Nancy goes further, arguing that smoking pot might actually reap benefits for the children, as well. “This is a very high-pressure place, and increasingly, the world at large is just a pressure cooker,” she says.

“Parents bear a large brunt of it, because raising children is nearly impossible. It’s a lot of stress. I [try] to relax as much as possible in whatever way is possible. Kids pick up on that stress and it’s bad for us — and it’s bad for them.”

But Samuels says what’s really harmful for your kids is setting a bad example.

“Just think of the message you’re giving to your child,” he says. “We’ve become a nation that needs to check out . . . What’s so disturbing is that we live in a culture in which people need substances to reduce stress and anxiety instead of doing it in a healthy way, which is what we’re supposed to teach our children.”

*Names have been changed at interviewees’ requests