Has the Movement Opposing America’s Drug War Broken Through to the Mainstream?

Image from the Providence DARE/ Stop the Drug War event in Providence, RI this past Saturday…….Thanks to Keith Leach for the pictures, RICC for the Lemonade, and Bruce Reilly for hosting a great event!-UA 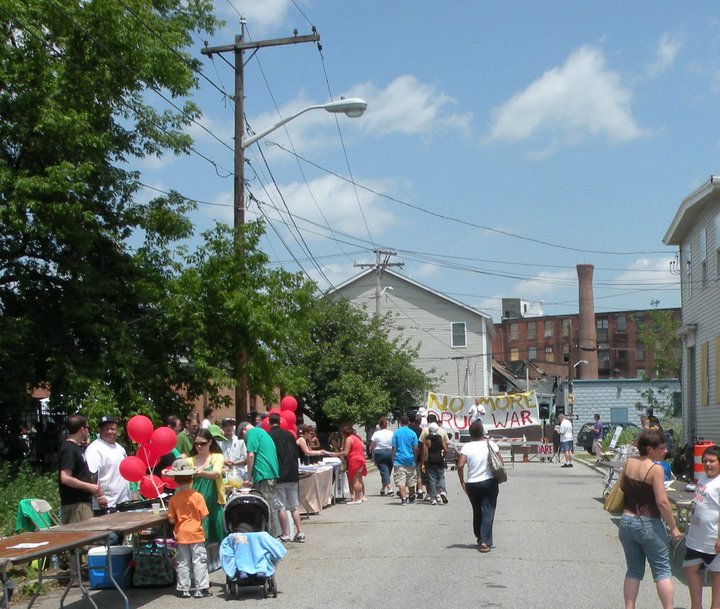 “Call off The Drug War” says former U.S. President Jimmy Carter in an op-ed for the New York Times. His article is released on the 40th anniversary of the day that President Nixon declared America in a “war on drugs.”

Carter aligns himself with a report released this month by the Global Commission on Drug Policy. That report argues that current strategies of imprisoning non-violent drug users and small time dealers has cost one trillion dollars, and led to 40 million arrests, but not reduced the availability or use of drugs. In short, the report says the drug war failed.

The report was endorsed by 16 world leaders, including former presidents or prime ministers of five countries, former US Secretary George Shultz, and the UN Secretary-General Kofi Annan.

The 40th anniversary of the Drug War might well be remembered as the moment when the debate about Drug Policy shifted, and opposition to the drug war became main stream.

African American leaders have been historically conservative about the drug war but that seems to be changing. Jesse Jackson, a long time supporter of the drug war shifted sides and wrote in support of the Global Commission on Drug Policy’s report this month. Regarding the drug war, he writes in the Chicago Sun, “it would be impossible to invent a more complete failure.”

Leaders from African American and religious communities, including Rev. Jesse Jackson and Dr. Ron Daniels, held a forum Friday at the National Press Club in Washington DC to denounce current drug war policies and their racial bias. Despite the fact that the use and sale of drugs is no higher among African Americans than among white Americans, black men are sometimes jailed at rates20 to 50 times higher than white men – for the same nonviolent drug offenses.

In his op-ed, Jimmy Carter explains how the prison population jumped from 500,000 when he left office in 1981 to 2.3 million in 2009. Carter blames the war on drugs for this trend. He says, “The single greatest cause of prison population growth has been the war on drugs, with the number of people incarcerated for nonviolent drug offenses increasing more than twelve fold since 1980.”

In 1977 President Carter told congress, “the country should decriminalize the possession of less than an ounce of marijuana” and he “cautioned against filling our prisons with young people who were no threat to society.”

A woman named Alika, a 26-year-old single mother in Brooklyn made news this week after being fired from her job with the New York City Housing Authority as a result of being arrested for possessing a small bag of marijuana in her purse. Criminal records are instantly accessible on the internet and the collateral consequences of drug arrests — like job loss and deportation — are routine and severe.

The drug war is deeply entrenched in our society. Systematic reforms will require support and courage from current politicians and not just former ones like Jimmy Carter. And our elected officials will not budge until the people who vote for them make their opposition to the drug war heard clearly.

The 40th anniversary of the war on drugs became an opportunity for leaders from diverse backgrounds to emerge with the unified message that the drug war failed. It is unusual and thrilling to see support for an issue that has been taboo for so long. We are witnessing a shift of opinion on drug policy. Is it too much to believe that we may also be seeing the beginning of a social movement?