Before you reach for a light, ALWAYS check for the fuzz! SMH -UA 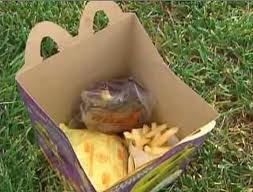 An Elgin man was arrested early Monday for possession of marijuana after he allegedly lit up while waiting, just in front of a police car, in the drive-through lane of a suburban McDonald’s restaurant.

A police officer waiting directly behind the car being driven by Jose S. Barrera, 21, was tipped off after he smelled marijuana while waiting to get his food from the drive-thru window, the Chicago Sun-Timesreports. He then saw Barrera blow smoke out of the passenger-side window of his car. The officer subsequently pulled him over and discovered a Tupperware container filled with pot in the vehicle.

Barrera was charged with possession of about 1.4 grams of marijuana, according to the Daily Herald, and was released on a $120 bond. He now awaits a July 22 hearing.

AG with the right idea…..