WOW! They are kids……take it easy man! -UA 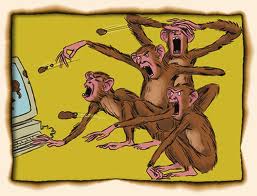 Sterling Heights— Authorities say three men are in custody and expected to face multiple felonies on allegations they kidnapped a group of teens, bound them with duct tape and threatened to cut off their fingers and toes with a circular saw.

Sterling Heights Police responded to a home in the 13000 block of Canal around 1:45 p.m. Monday after a woman called authorities to report that her 16-year-old son had been assaulted.

Police arrived at the home where the assault allegedly occurred and learned that the homeowner runs a medical marijuana grow operation.

The man told detectives that his home had been burglarized several days ago and that he’d heard that several 15- and 16-year-old boys, who live outside the city and attend Dakota High School, were responsible. The man said that the burglary had not been reported to police.

The homeowner’s teenage son, who allegedly knows the juveniles, then lured the teens to the home under the pretenses that they would get an ounce of marijuana for free, police say.

Once the juveniles arrived, police say the homeowner and two associates, all 45-year-olds, took the teens into the basement, bound them with duct tape and pistol whipped one of the boys and struck them with the scabbard of a samurai sword.

Police say the three men also threatened to cut off their fingers and toes with a circular power saw while they held it next to one victims face as it was running.

Police say about five or six juveniles came to the home in two groups. Two of the teens were able to flee before being abducted, one of whom called his mother, who contacted police.

One teen suffered a possible broken arm and the other three had less serious injuries including bruises, contusions and lacerations, police said.

The men are in custody while the Macomb County Prosecutor’s Office evaluates charges.