Mom of 3 in chronic pain is not a pothead

Last week the state Supreme Court ruled it was OK that Jane Roe, not her real name, was fired from a Bremerton call center after she tested positive for using medical marijuana 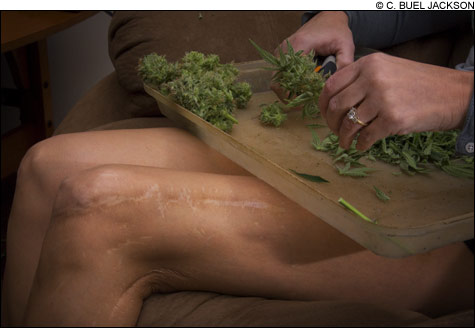 It turns out “Jane Roe,” the woman who got fired for using medical marijuana, doesn’t smoke the stuff. Never has.

“I vaporize it, into a smokeless form,” she says. “I don’t want any of that smoke in my lungs, and I don’t want the smell.”

Why not? Because she’s a Kitsap County mom of three. When I first tried to talk to her last week, she was shuttling her kids from school to sports to music lessons.

“I’m a soccer mom over here,” she said when I finally got her on the phone. “One who, I guess, is living in a dangerous gray area.”

Last week the state Supreme Court ruled it was OK that Roe, not her real name, was fired from a Bremerton call center after she tested positive for using medical marijuana.

She was fired though she didn’t use pot at work, was never high on the job and was by all accounts a fine employee (top of her training class, she reports). She also warned the company she likely would test positive and had produced, ahead of time, her doctor’s authorization to use the drug to relieve severe migraines and neck pain.

She figured: There’s a state law that says med pot is OK. Voters passed it 13 years ago. So why slink in the shadows or try to fake the drug test?

But the company, TeleTech, in Bremerton, canned her anyway. Zero tolerance, it said.

The Supreme Court sided with the company, saying the law is either silent or murky on workplace rules for med pot users and, besides, all pot is illegal under federal law, anyway.

“A victory for employers,” crowed the company’s lawyer in a press release.

I realize there are technical and legal reasons why the Supreme Court ruled as it did. Such as: It’s up to the Legislature. But I do wonder how the justices might have ruled if they’d had a chance to talk to Jane.

She told me she’d tried eight prescription drugs for her neck pain. Some of them sort of worked. But some had such debilitating side effects, such as dizziness or weight loss, they nearly killed her.

“Once they found me unconscious on the floor in front of the refrigerator,” she said. “Those prescription drugs, the ones the government allows, those are the really dangerous drugs.”

She says it still never occurred to her to try pot. It was only when her husband suggested it, out of desperation, that she gave it a go.

“He was so tired of me being in pain. You can’t raise kids when you’re like that 24/7. I was angry all the time. It was hurting our marriage, my ability to be a mom, everything.”

Pot remedied all that. I know, some say the debate about pot as medicine is a ruse so potheads can get baked without the legal hassles. But Jane Roe swears it works so well she still uses it, daily, even though it cost her a job.

She was startled when she got portrayed as some sort of criminal in court.

Only it’s supposed to be legal, in our state, for medical purposes. It’s a distinction that seemed lost on him, and, at times, the justices.

“Maybe they’ve never had to deal with being in pain?” Roe wondered.

Roe says she no longer cares much about the call-center job. She thinks it’s absurd she likely could have tested positive for anything from Ambien to OxyContin to Xanax, with no consequences.

“So many people sit there at work, high on their pain pills. And I get fired for this.”

She may be under the same sword again soon.

“I just got my B.S. degree in Health Administration, and my dream is to run a nursing home, so I’m sure I’m going to face more drug tests,” she says.

“I’ll have to make a choice, maybe, to just stop taking marijuana. I guess I might have to go back to the pain.”

So we’re forcing a soccer mom into family-wrecking levels of pain so she can follow her dreams. Helluva victory.