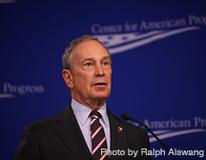 New York City’s police are targeting Black and Latino neighborhoods with a massive campaign of harassment and illegal frisks and searches in a push for marijuana arrests. NYPD arrests tens of thousands of people for possessing small amounts of marijuana each year, and 86% of them are Black or Latino — even though White people use marijuana at higher rates. Marijuana possession is supposed to be treated like a traffic violation in New York. But police are falsely charging people with having marijuana “in public view,” and giving thousands of young people a criminal record which can follow them for the rest of their lives, severely limiting their freedom and opportunities.

Mayor Bloomberg is the one person who can immediately order NYPD to stop this. Please join us in calling on Mayor Bloomberg to end this racially-biased, destructive and expensive policy.

Oh I thought they already did that pretty regularly…