Good thing its not up to the Lt. jr Governor!- UA 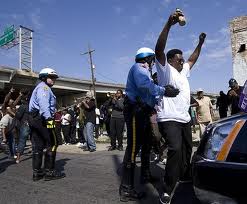 More than 30 years ago, New York state decriminalized the possession of small amounts of marijuana. But one line in that 1977 law has led to the annual arrest of thousands of New Yorkers under the NYPD’s controversial stop-and-frisk searches.

Having fewer than 25 grams of marijuana at home is not a criminal offense, but displaying or smoking the same substance out on the street (or in any public place) is. The police have used that fact as part of an aggressive, and critics say unconstitutional, campaign to deter crime by detaining large numbers of people in some of the city’s poorest neighborhoods.

So far, Jeffries told HuffPost, the response has been encouraging, but time is running out before the end of the session on June 20.

“If we are able to advance it out of committee, it has a shot of passing in the Assembly,” he said.

Gabriel Sayegh, the director of state organizing for the Drug Policy Alliance, which supports the bill, said he was not optimistic the measure would become law this year. But he added that the proposal has sparked “quite the conversation” in the capital.

“In short, this is Albany, so this is going to be a very a difficult fight. It’s not going to pass without a major, major push,” Sayegh said.

Both Sayegh and Jeffries pointed to one sign of hope for advocates of further decriminalization: Mayor Michael Bloomberg and his police commissioner, Ray Kelly, have yet to take a public position on the decriminalization push.

Across the border in Connecticut, a bill to decriminalize pot possession in general passed in the Senate on Sunday and the House on Tuesday.

When Gov. Dan Malloy (D) signs the measure into law, as he has promised to do, a first-time violation for possessing less than a half ounce of pot will carry a $150 fine. Possession of less than four ounces can currently be punished with a $1,000 fine and a year in prison.

Connecticut would become the 14th state to decriminalize some amount of marijuana.

Michael Lawlor, Governor Malloy’s undersecretary for criminal justice policy and planning, told HuffPost the bill was intended to “free up a lot of resources in the criminal justice system to focus on more serious and violent offenses.”

Instead of sending suspects to be booked and enter the criminal justice system, they will receive a fine, and in Lawlor’s experience as a criminal justice professor, “swift and certain punishment is more effective than potential severity of punishment.”

Another bill in Connecticut, to legalize medical marijuana, faces a more uncertain future. Lawlor sees “strong bipartisan support” in his state, but is also concerned about a filibuster threat in the Senate.

“If we could get it debated, it would certainly pass,” Lawlor said. Another such bill passed in 2007 but was vetoed by then-Governor M. Jodi Rell.

State Sen. Toni Boucher (R) opposes both the decriminalization of marijuana and the current version of the medical marijuana bill. She has gone so far as to claim that Malloy supports the legislation out of a personal interest, according to an interview with the Stonington Patch:

“Malloy is promoting this bill,” she said. “One of his sons has had serious problems with drugs. [The governor] has a personal interest in this.”

Boucher was referring to Benjamin Malloy’s arrests for dealing marijuana and robbing a man with marijuana at gunpoint. Governor Malloy declined to comment to Patch.