2.5 months…..why even bother? seems like a big waste of resources……-UA 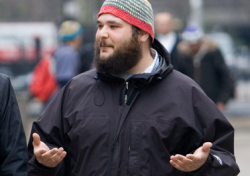 A man who promotes marijuana as a church sacrament and sold the drug to undercover officers has been jailed for three months.

Shahrooz Kharaghani, 32, was previously found guilty of trafficking and possessing cannabis for the purpose of trafficking in a Queen St. E. neighbourhood.

Ontario Superior Court Justice Thea Herman said Monday she accepts that Kharaghani, who sold pot from the group’s Beach-area storefront church, was not motivated by profit and believes pot-smoking is beneficial.

“There were likely people who lived in the vicinity who do not share this view,” Herman said.

Kharaghani will serve 2 ½ months, after credit is given for pretrial custody.

Crown prosecutor Nick Devlin had originally recommended a six-month community sentence, likely to involve one or two months of house arrest, a curfew afterward and some form of community service.

But Kharaghani’s lawyer, George Filipovic, told his sentencing hearing earlier this month that given house arrest, his client would immediately smoke pot to commune with God, which would mean violating a condition to “keep the peace and be of good behaviour.”

The breach would land Kharaghani in jail, so he might as well go to jail straightaway, Filipovic argued.

Kharaghani and co-accused Peter Styrsky, 53, are ministers in the Assembly of the Church of the Universe, which has an estimated 4,000 congregants across Canada.

They smoke dope as a spiritual practice and wear cotton and hemp beanies as religious headgear.

Both Kharaghani and Styrsky have been convicted in a case that dates to 2006.

Styrsky has been sentenced to a six-month jail term, but was immediately released because of credits for pre-trial custody.

At their trial the two men lost their constitutional challenge, on religious grounds, of Canada’s pot laws.

Herman ruled that group members were earnest in their beliefs and agreed that their religious rights were being limited.

But the judge dismissed their challenge because she did not think it was possible to create a workable religious exemption to Canada’s pot-smoking and selling prohibitions.

But both men are going to appeal Herman’s constitutional ruling, Filipovic told reporters outside court.

Filipovic said his client is doomed to a life in and out of jail because he will never give up smoking pot.

Devlin, who prosecuted the case with Donna Polgar, told reporters that selling pot is a crime, and the court found that there are no religious exemptions.

“Members of the community can be satisfied that the courts won’t permit people to set up residential drug conveniences stores in their neighbourhoods whether under the guise of a religion or otherwise,” Devlin said.