Life sentence if the operation is extensive enough?! Are you kidding me?! -UA

More than 1 million marijuana plants have been eradicated from national forests across the South during the past 10 years, but federal authorities say illegal pot farms are still a concern — and hikers should be on the lookout as they visit public woodlands this summer. 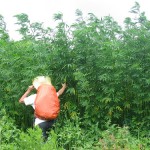 National forests, including those in South Carolina, provide remote areas that can shelter pot growers seeking to make the illicit dollar. While only a fraction of national forest lands are affected by illegal marijuana-growing, the “safety risks are real, and visitors and employees should be informed,” the U.S. Forest Service said in a news release last week.

The Forest Service is warning people about the dangers of encountering marijuana growers as well as the toll pot farms take on streams and wildlife in national woodlands.

Farming marijuana in national forests has been an issue for years in parts of the Appalachian Mountains and in California. But it also has happened in South Carolina from time to time. In the past four years, the government has found several growing operations in the Sumter National Forest, located in three main segments from the Georgia border to Newberry.

Many pot-farming operations aren’t along well-known trails but in remote sections of forests. And that’s where folks who venture from more traveled parts of forests might see unusual signs of trouble.

A well-used trail, for instance, wouldn’t be expected in a remote section of a national forest. Nor would people armed with rifles at a time when hunting seasons are closed, Forest Service officials say. Hikers might also run upon extensive camps, deep on national forest land, full of food, fertilizer, weapons and garbage.

If people encounter such a site, they’re urged to contact the Forest Service or local authorities and stay away from suspected traffickers.

“As soon as you become aware that you have come upon a cultivation site, back out immediately,” the forest service office warns. “Never engage the growers, as these are extremely dangerous people.”

Kershaw County Sheriff Jim Matthews, a former federal drug enforcement agent, said marijuana growers are sometimes attracted to national forests because they don’t risk the potential seizure of their land if they get caught.

At the same time, “the national forests are a little more remote,” he said. “It’s more difficult to attribute to somebody unless we catch them in the act.”

Not only can pot growers be dangerous, but their activities can also pollute creeks and kill wildlife. Pesticides, for instance, can run off hill sides and into waterways that are otherwise clean. Soil erosion can wash poisons into creeks because marijuana cultivation occurs in cleared areas, according to the Forest Service.

Allen St. Pierre, a spokesman for the pro-marijuana organization NORML, said it’s a shame marijuana farmers must grow pot on public lands. If marijuana is legalized, no one would do that, he said. He likened pot farmers in Southern forests to the moonshiners of Appalachia long ago.

Joe Walsh, a Forest Service spokesman in Washington, said South Carolina’s two national forests have not traditionally been a heavy target for big marijuana organizations to set up shop. At slightly more than 620,000 acres combined, South Carolina’s Sumter and Francis Marion national forests are small compared to those in the western United States.

But they’re still big enough for some shady characters.

In one 2007 case, two Gaffney residents were prosecuted for conspiring to cultivate marijuana in the Sumter National Forest. During the investigation, some 200 pot plants were found and $3 million in cash was confiscated. One of the suspects received 18 months’ detention; the other got six months’ house arrest and probation.

The other case occurred in 2009, when a hunter scouting the Sumter National Forest came upon a bigger dope-growing operation. During the probe, authorities seized 3,500 marijuana plants and deputies in Newberry County charged two men with pot manufacturing. The men pleaded guilty in November 2010 and were sentenced to 16 months in prison, Walsh said.

Across the South, authorities have gotten rid of 1.01 million pot plants growing on 3,023 sites in national forests since January 2001, Walsh said.

Penalties for growing pot on national forest land can be severe if the operation is extensive enough. In Georgia four years ago, a person received a life sentence for organizing a conspiracy to cultivate and distribute marijuana grown on the Chattahoochee National Forest, which is in the mountains near the South Carolina border.

The State Law Enforcement Division works with the S.C. Forestry Commission to identify marijuana on land the commission oversees, such as Columbia’s Harbison forest and the Manchester forest, near Sumter.

“These folks do booby-trap things,” state Forester Gene Kodama said of marijuana growers. “SLED trains you to be cognizant of that and be aware of what to look for.”

Kodama said he encountered a disturbing situation on property he owns in the Lowcountry during the 1990s. At the time, Kodama discovered a number of marijuana plants in containers that had been placed on a remote parcel he owns. That prompted him to call authorities.

“The ones that were on my property were probably 6 or 8 feet tall,” Kodama said. “The next time I went back out there, it was all gone. That tells you this was a dangerous place. You don’t know these people from Adam’s house cat.”