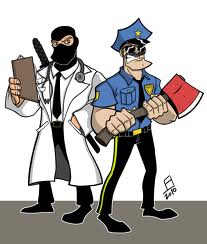 Too bad they know so little.

(MOLALLA, Ore.) – I am constantly confounded by the Oregon legislators regarding MMJ and the attitude of the marijuana-phobes in the police and the legislature.

The Oregon law is one of the more restrictive in the nation and it is a model for most other states. The police associations wimper and cry that “marijuana is out of control” while it isn’t, comparing it to heroin, cocaine, meth and even alcohol which really are the problems but apparently they have tunnel vision of marijuana only.

Ask anyone but the marijuana-phobe police and they will tell you that the Oregon Medical Marijuana Program (OMMP) is going well. Well, it is.

Representative Andy Olson, a retired policeman says, “I am not trying to kill the program but ensure that the option is available for patients who need it.”

Then he goes into a crocodile tear statement that, “The thing that drove most of (previous) bill was a sense of abuse in the system. We wanted to move forward with something that puts in more accountability but still protects the patient and their needs.”

The present bill is even tooooo restrictive so many patients who need it cannot get it.

About 50,000 Oregonians have permits and though some of them do abuse the privilege, serious criminal activity is rare.

The new law would target users less than 18 years old. It may surprise the legislator to know that most of those are NOT medical patients but they do represent the largest group of users.

There are NO loose rules for the “under 18” users.

He decries the lack of a database for grow sites. There are about 30,000 of them. Does he have the police to visit them?

He also seems to believe that doctors are lax in signing for permits.

If the patient has a diagnosis of an acceptable medical condition, the doctor can sign their name. If it’s not acceptable to the OMMP, THEY will not issue a permit.

Applications for permits (they are not prescriptions) have been signed by about 3,500 doctors for 40,000 patients and 20,000 caregivers.

The US Government estimates that there are 300,000 marijuana users in Oregon. Doctors who sign for patients cannot keep up with the demand with legitimate medical patients. We will probably hit 50,000 medical marijuana patients this year.