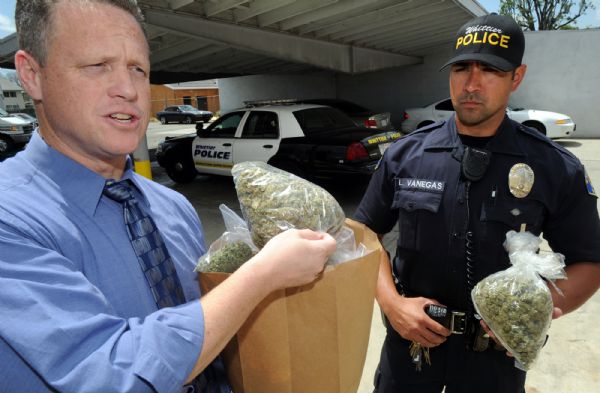 Aren’t there cartels these police could be targeting? And why are the cops giving the street values of the medicine? These Cali cops need to relax.-UA

Instead of providing a notice of violation and threatening to sue if they didn’t close, a dozen members of Whittier police and L.A. Impact Task Force officers came down on the two dispensaries, leaving shattered glass and bitter feelings.

Both medical marijuana dispensaries are located outside the area allowed by city ordinances.

“They broke in the glass door and shattered it when they came in,” said Laura Kaplanian, owner of GreenReleaf Healing Center, 8645 Greenleaf Ave.

“They trashed our place,” Kaplanian said. “They took all of the patients’ medicine (marijuana) from their hands. It was inhumane. We’re not animals.”

Kaplanian, whose dispensary opened in February and was not in area the city allows for such uses, said she never received any letter or order from the city to close.

Michael McGehee, owner of the Apex – Alternative Patient Dispensary – at 14440 Whittier Blvd., said he, too, never received any such notice from the city.

“Why not give us a cease-and-desist order?” McGehee asked. “We would have just packed up and left. This was a huge raid.”

McGehee said he was surprised by the tactics, saying the police had a battering ram but didn’t use it because their front door was unlocked and he unlocked the other door.

There were three patients at his location when the police came, he said.
“They had all of their guns pulled, screaming, `Get down,”‘ he said. “The patients didn’t even know what was going on.”

“It’s because they were committing criminal violations,” Piper said of the dispensaries.

“They’re outside the scope of the Compassionate Use Act,” he said, referring to the voter- approved Proposition 215 that legalized medical marijuana in California. “We were conducting an investigation and determined there were criminal violations.”

Both Kaplanian and McGehee say their collectives are nonprofit.

The police arrested five people – one of whom remains in custody.

Three of the individuals were involved in a third raid at a medical clinic in the 7200 block of Greenleaf Avenue.

Dr. Arun Sherma, 32, of Los Angeles was arrested on suspicion of aiding and abetting an unlicensed medical practice.

Janna Li, 41, and Andrew Ligay, 45, both of Hollywood, are accused of owning that same practice and practicing medicine without a license.

Under California law, only physicians can own a licensed practice, said Carmen Aguilera-Marquez, supervising investigator for the California Medical Board.

All three posted $20,000 bail and were released Wednesday.

A fourth person arrested, Ryan Lockridge, 20, of Norwalk, remains in custody. He was turned over to sheriff’s officials on suspicion on violating his county probation.

McGehee, who is on federal probation for narcotics trafficking, was taken into custody but released Thursday with no bail required.

They seized 6 pounds of marijuana, including 44 plants, at the GreenReleaf Healing Center. The drugs were worth $16,000 to $18,000 on the street, Ramos said.

“I’m really surprised that it got to that point,” said Robert Ortiz, director of Whittier Hope Collective, which has a permit from the city.

“A simple letter to stop the operation would have been sufficient,” Ortiz said. “You won’t see a lot of violent angry people within the medical marijuana community. A lot of people are trying to do this for the compassionate side of it.”

Kris Hermes, spokesman for Americans for Safe Access, which promotes safe and legal access to cannabis for therapeutic use and research, wouldn’t comment on Whittier’s tactics but said he doesn’t believe an aggressive law enforcement raid is needed.

“I just read the other day that someone was forced from a wheelchair onto the floor,” Hermes said.

“Much of the time police are armed to the teeth and there’s no threat to law enforcement,” he said. “There’s no reason to barge in and smash things.”

Pico Rivera shut down a medical marijuana dispensary this week by issuing a cease-and- desist letter.

After an investigation by a building inspector, Pico Rivera’s city attorney was contacted, Prang said.

The dispensary closed after receiving a letter threatening court action.

Los Angeles County typically sends someone from its zoning enforcement staff – often with a sheriff’s deputy for security – to check potential dispensaries out, said Alex Garcia, supervising regional planner for the county.

If necessary, they get an inspection warrant. If the location is an illegal dispensary – the county allows none now – a notice is issued warning of fines of $1,000 a day, Garcia said.