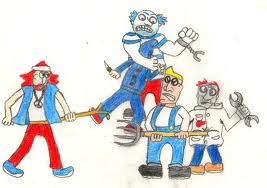 Divisions within industry come into the open

Maybe they could find some common ground……..-UA

Rifts between two different groups pushing for the legalization of marijuana in Colorado continued to grow last week after one coalition went ahead with a so-called “conservative” attempt to legalize marijuana in 2012.

Legalize 2012, one of activist groups plotting a legalization ballot initiative, on Friday blasted another coalition for filing eight different versions of a legalization initiative that they say “appeals to law enforcement.” Laura Kriho, a driving force behind Legalize 2012, was particularly upset with members of the coalition that includes the Marijuana Policy Project (MPP), Drug Policy Alliance (DPA), Safer Alternative for Enjoyable Recreation (SAFER), and Sensible Colorado for filing their initiative with the Secretary of State without giving them much time to review the initiative’s language.

“I’m not sure why they did this without telling anybody,” said a statement from Kriho. “Even the legislature gave us more notice to comment on their proposed legislation than they did. It really shows their bad faith.”

“Rather than provide any suggestions, they spent a week complaining,” he said.

Tvert said the coalition submitted eight different versions of the legalization initiative to see what language would pass the Title Setting Review Board, which has to approve an initiative before it can go on the ballot. All of the versions have the same basic idea Ń legalize marijuana use and possession of up to an ounce for people over the age of 21 Ń though they differ when it comes to issues like taxes and earmarking.

Legalize 2012 is against the initiative’s one-ounce limit because they believe it could create confusion since possession of two ounces or less of marijuana is currently considered a “petty offense.” The group also worries that the one-ounce limit would require the Department of Revenue to convert their Patient and Medicine Tracking Database and Surveillance System to a “massive database” for marijuana users so authorities could track how much marijuana is bought and sold.

Legalize 2012 also opposes the versions of the initiative that would allow a 15-percent excise tax on the sale of marijuana.

“The lines have been clearly set now on the division of cannabis reform policy in Colorado,” says a press release from Legalize 2012. “The MPP/DPA/Sensible/SAFER initiative has chosen to ignore any local efforts for a real legalization ballot initiative in favor of writing an initiative that appeals to law enforcement.”

However, Tvert thinks the versions of the legalization initiative that were filed have the best possible language to achieve the goal of legalizing marijuana. He said while he might not agree with everything in the eight versions of the initiative, the language has been studied by lawyers, has taken into consideration the feedback of thousands of people and has a good chance of making it onto the ballot in 2012.

“It’s unfortunate that (Legalize 2012) is spending its time and energy fracturing the marijuana reform movement and not working to build support for legalization instead,” said Tvert. “It’s easier to tear something down than it is to build something up.”

Tvert is confident that their legalization initiative could pass even without the support of groups like Legalize 2012.

He pointed to polls that were issued this year that found approximately 50 percent of Coloradans support legalizing marijuana. SAFER ran a legalization effort in 2006 that failed on a 61-38 percent vote, but Tvert believes more people have become in favor of legalization since then.

However, Legalize 2012 is less sure that the coalition’s initiative will pass if it does not have the entire marijuana community’s support.

“This unilateral move by MMP/DPA/Sensible/SAFER cast doubts that any cannabis law reform ballot initiative in Colorado would be successful,” the group says in a press release.