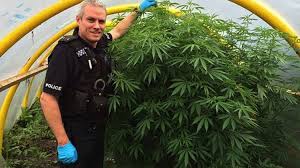 This one really messes with my moral compass…..This woman is scum……karma found ya detective! -UA

DUANESBURG — Authorities seized several laptops, marijuana and “assorted paperwork” from the Duanesburg home and the work and personal vehicles of a highly respected University at Albany police detective and her husband as part of a sting involving an alleged marijuana-growing operation, according to court papers.

The two, who face a federal charge of conspiracy to manufacture marijuana, were released Wednesday after an appearance before U.S. Magistrate Judge Randolph Treece in Albany.

Wendy Knoebel, 48, is an investigator at the University at Albany campus. Kenneth Knoebel turns 44 at the end of the month.

Attorney Adam Parisi of Schenectady, who is listed in court documents as the couple’s lawyer, did not return calls Thursday seeking comment.

UAlbany spokesman Karl Luntta said Knoebel’s employment status was a personnel matter and declined to say if she had been suspended.

A feature story on Knoebel was removed from the UAlbany website by Luntta. He said he took it down because of all the attention that would be focused on Knoebel. In the story, she is highlighted for compassion toward students, and she talks about sifting through garbage and laundry for investigations and making arrests.

“What really separates her from other highly skilled professional is that she’s relentless,” UAlbany police Chief J. Frank Wiley said in the story. “She has the eye of the tiger. There is no one like her anywhere.”

The feature story included a photo of her and several other UAlbany officers with President George Philip.

Police said they also found small amounts of marijuana in the couple’s home.

Knoebel became a SUNY police officer in 1991. She moved to Tennessee in the mid-1990s and continued her police career there before returning to the SUNY police force. She was assigned to the University at Albany campus in 1995.