The justices rule 8-1 that officers can forcibly enter if they determine suspects are trying to hide drugs.

Lets just make them a spare set of keys too……..-UA 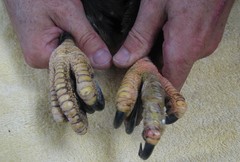 WASHINGTON — The U.S. Supreme Court on Monday gave police more leeway to break into homes or apartments in search of illegal drugs when they suspect the evidence might be destroyed.

The justices said officers who smell marijuana and loudly knock on the door may break in if they hear sounds that suggest the residents are hiding the drugs.

Residents who “attempt to destroy evidence have only themselves to blame” when police burst in, said Justice Samuel A. Alito Jr. for an 8-1 majority.

In a lone dissent, Justice Ruth Bader Ginsburg said she feared the ruling in a Kentucky case gives police an easy way to ignore the Fourth Amendment. She said its “core requirement” is that officers have probable cause and a search warrant before they break into a house.

“How ‘secure’ do our homes remain if police, armed with no warrant, can pound on doors at will and … forcibly enter?” Ginsburg asked.

An expert on criminal searches said the decision would encourage the police to undertake “knock and talk” raids. “I’m surprised the Supreme Court would condone this, that if the police hear suspicious noises inside, they can break in. I’m even more surprised that nearly all of them went along,” said John Wesley Hall, a criminal defense lawyer in Little Rock, Ark.

In the past, the court has insisted that homes are special preserves. As Alito said, the Fourth Amendment “has drawn a firm line at the entrance to the house.” One exception to the search warrant rule involves an emergency, such as screams coming from a house. Police may also pursue a fleeing suspect who enters a residence.

The Kentucky case began when police in Lexington sought to arrest a man who had sold crack cocaine to an informer. They followed him to an apartment building, but lost sight of him. Upon smelling marijuana coming from one apartment, they pounded on the door and called “Police. Police. Police,” and heard sounds of people moving.

At this, the officers announced they were coming in and broke down the door. The suspect was not in the apartment; instead, police found Hollis King smoking marijuana. They also found cocaine. King was convicted of drug trafficking and sentenced to 11 years in prison.

The Supreme Court ruled in Kentucky v. King that the officers’ conduct “was entirely lawful,” and they were justified in breaking in to prevent the destruction of the evidence.

“When law enforcement officers who are not armed with a warrant knock on a door, they do no more than any private citizen may do,” Alito wrote. A resident need not respond, he added.

The ruling was not a final loss for King. The justices said the Kentucky state court should consider again whether the police faced an emergency situation.

Ginsburg, however, said the court’s approach “arms the police with a way routinely to dishonor the Fourth Amendment’s warrant requirement in drug cases.” She said the police did not face a “genuine emergency” and should not have been allowed to enter the apartment without a warrant.