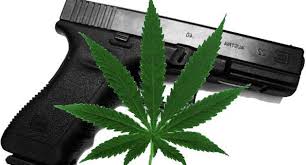 In Oregon, medical pot and guns go hand in hand

But some local sheriffs don’t think medical marijuana users should be allowed to obtain concealed weapons permits. The case is before the state Supreme Court.

Are there Any Releaf patients in Oregon care to respond to these claims? -UA 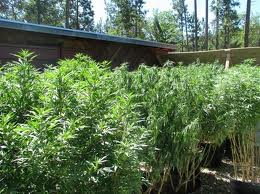 Cynthia Townsley Willis, a retired school bus driver and grandmother of four, carries a spray bottle of marijuana-infused skin oil in her purse to treat her frequent, painful muscle spasms. Her Walther P22 pistol most often gets slipped into a shoulder holster under her jacket — driving the lonely roads that traverse the hills and dense woodlands of the Rogue Valley, who knows when she might need it?

Here in the pot belt of rural southern Oregon, possibly the only thing more ubiquitous than marijuana is guns, and Willis, who is legally registered with the state as a medical marijuana user, feels better when she has both.

But Jackson County Sheriff Mike Winters doesn’t, and he is trying to pull Willis’ concealed weapons permit. Willis, a diminutive 54-year-old California native, is now one of four plaintiffs in a case before the Oregon Supreme Court to determine whether medical marijuana users are entitled to the same gun-carrying privileges as everyone else.

Sheriffs across Oregon say that the state’s 13-year-old medical marijuana law has spawned tens of thousands of hobby users, and see this case as a crucial step toward preventing what they consider a dangerous mix of guns and drugs.

“This whole medical marijuana thing is a farce, and you can quote me on that,” said Clatsop County Sheriff Tom Bergin, president of the Oregon State Sheriff’s Assn., who believes only a fraction of the state’s nearly 40,000 registered medical marijuana users have a legitimate need for the drug.

“I always ask them, ‘How many times a day do you medicate?’ They say it’s like four or five times a day,” Bergin said. “Well, that’s 16 hours a day you’re running around stoned. Do we even want them behind vehicles? No. Do we want them carrying around a gun? Absolutely no.”

Oregon essentially requires sheriffs to issue concealed weapons permits unless the applicants have a history of violence, threats or illegal drug convictions.

The sheriffs argue that forcing them to issue the permits to marijuana users puts them in conflict with federal law, which makes it a crime for users of illegal drugs to possess a gun. Although 15 states (plus Washington, D.C.) now have medical marijuana laws, the substance remains illegal under federal law.

“We’ll enforce any law that’s out there, but when they’re conflicting, we have to do our best to decide which of those laws has dominance,” said Washington County Sheriff Rob Gordon.

Willis and others say owning and carrying a gun is an accepted part of life in rural Oregon, and that those who rely on marijuana to treat legitimate medical issues shouldn’t be rendered defenseless.

In the case of Willis, who drives several miles each day from her home in rural Gold Hill to volunteer at a medical marijuana supply shop in Medford, her muscle spasms are so severe that often she can barely stand. Eating a marijuana cookie or rubbing cannabis oil on her skin is the only way she’s found to relax her muscles. She never uses enough to get high, she said.

Paul Sansone from Gales Creek in Washington County, another plaintiff in the case, started carrying a concealed handgun in the 1980s for self-defense, and said the sheriff at the time actually helped him buy his gun.

Since then, the county has gotten a new sheriff, and Sansone developed a chronic gastrointestinal condition that gives him such severe nausea he is almost unable to eat. The only thing that helps is small quantities of medical marijuana.

Two trial court judges and a state appeals court sided with Sansone, Willis and the other two plaintiffs. The Supreme Court heard oral arguments in the case in March, and is expected to rule in the coming months.

In his ruling in 2008, Circuit Court Judge Steven L. Price said the plaintiffs were “hardworking, honest, conscientious people who use medical marijuana as contemplated by the statute to alleviate pain and their symptoms. They are similarly responsible in their use and possession of weapons.”

But sheriffs say there are growing questions about how to maintain public safety as medical marijuana use rapidly escalates.

“I think that 100% of our home invasion robberies have been tied to narcotics, and probably 95% of those, this is just my best guess, involve medical marijuana growers,” Sheriff Gordon said. “It’s just ripe for somebody to get hurt.”