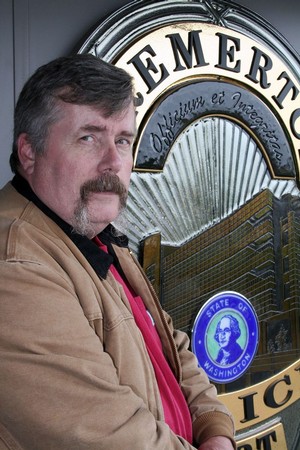 Narc Is So Despised, A Local Strain Of Marijuana Was Named In His ‘Honor’

A former Washington drug cop so notorious for his misdeeds and aggressive tactics that a strain of medical marijuana was named after him in retaliation has been federally indicted for unlawfully selling guns.

Roy Alloway spent 32 years in law enforcement, the last 10 of which he was involved in the WestNET regional drug task force. Alloway took something of an unhealthy personal interest in giving additional pain to medical marijuana patients, according to many activists in the area, who “see him as a cop determined to lock up even legal users of pot,” wrote Nina Shapiro at the Seattle Weekly.

Alloway made a career of trashing houses and intimidating their occupants, apparently not giving a damn if the people he harassed were legitimately sick or not.

And that’s exactly why a potent marijuana strain was named “Alloway” in his “honor.” Created by a well-known Everett breeder associated with advocate Steve Sarich of CannaCare, the Alloway strain includes the genetics of popular Seattle strain PermaFrost, with a little White Widow reputedly in the mix as well.

“Where do you begin?” said Sarich, who was raided by Alloway and WestNET in 2007. “This guy is a real piece of shit, and has been for years,” Sarich told Toke of the Town Monday afternoon. “I can’t wait to see how many of the cases Alloway was involved with are overturned, if he gets locked away on these charges.”

​For just one example of how he habitually got down, there was the infamous May 2010 raid by Alloway and other WestNET goons of an Olalla, Washington home linked to a Tacoma medical marijuana dispensary known as North End Club 420.

According to a mom who lived at the house, the Rambo wanna-be’s handcuffed her 14-year-old son, took money kept in the Mickey Mouse purse of her nine-year-old daughter and seemed to take an unsavory glee in loudly announcing that their dad was “going to jail” because he was a “drug dealer.”

As if that weren’t enough, clueless WestNET agents illegally seized signed petitions for marijuana legalization from the home (they were later forced to return the petitions).

Thank goodness that prosecution fell apart, like so many of WestNET’s vendettas, I mean cases, when Pierce County prosecutors decided to drop all charges against Guy Casey and Mike Schaef, owners of The Tacoma Patient Resource Center, also known as North End Club 420. Prosecutors said “there were too many holes in the case,” and their star witness was a known meth head, thief and violent offender whose testimony was seen as “not credible.”

Now it seems Alloway, a former Bremerton police officer, was busily violating the law for years, even as he harassed medical marijuana patients who weren’t.

When he wasn’t busy brandishing his pistol in the faces of medical marijuana patients and handcuffing their children, Alloway was allegedly selling pistols to undercover agents with the federal Bureau of Alcohol, Tobacco, Firearms and Explosives during gun shows.

Federal agents accuse Alloway of selling the guns without being properly licensed for the purpose of making a profit.

Alloway, a longtime Bremerton undercover narcotics detective, worked for both the West Sound Narcotics Enforcement Team (WestNET), a task force made up of officers from several local agencies, and the Bremerton Police Department’s Special Operations Group.

He retired in May 2010 after a career “full of commendations.” Yes, they’re still decorating police for harassing medical marijuana patients.

The statutory maximum for Alloway’s alleged crime as charged is five years in federal prison.

Alloway’s South Kitsap home was raided by federal agents in November as part of a sweep of several suspects accused of illegal gun sales around Western Washington.

Federal prosecutors emphasized that the paperwork required during gun sales is important, because law enforcement can trace the weapon’s sale, should the gun ever be used in a crime.

So, ironically, big “law and order” guy Alloway probably did far more to facilitate real crimes — including cop killings — than all the medical marijuana patients he ever hassled.

“Gun shows are legal, but funneling illegal gun sales through gun shows is not,” said U.S. Attorney Jenny Durkan. “Illegal gun sales allow guns to get in the wrong hands and blocks [sic] our ability to trace guns used in violent crimes. These defendants knew better, but put their profit ahead of the safety of the community.”