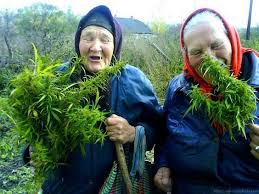 So this is what some baby boomers are doing to make money after losing all their retirement in the recession: growing pot. Two “grannies” are in jail today after reportedly being busted growing hundreds of pot plants inside their San Bruno home.

Aleen Lam, 72, and Virginia Chan Pon, 65, were arrested Friday afternoon after neighbors called the cops to report a burglary. Two men had been seen breaking down Lam and Pon’s front door, according to media reports.

When police arrived, they saw the front door broken — and through that, they saw nearly 800 marijuana plants inside the house.

Police located $3,000 in cash as well as an electrical bypass that allowed the two women to steal electricity from PG&E.

The pot bust itself is newsworthy, but the fact that it was two retirement-aged women behind the drug operation was even more astounding to law enforcement.

Both women pleaded not guilty in court on Monday where they were arraigned. The two have been ordered to appear in court for a preliminary hearing on May 13. They are being held on $100,000 bail each.

It isn’t the first time Pon has been busted by the cops. She is facing charges in Yolo County for passing more than $40,000 in bad checks at a local casino.

Police also arrested the two men accused of breaking into Pon and Lam’s home. Shortly after the burglary, police found them in South San Francisco. They had $12,000 in cash, marijuana equipment, and seven Ecstasy pills on them, media outlets are reporting.

Kitae Chae, 38, and Kenny Kong, 34, were arrested on suspicion of burglary.

So there you have it. Next time you offer up your Muni seat to that elderly woman on the bus, consider this: She just might be on her way to make a drug deal.

Everything You Need to Know About Flavanoids