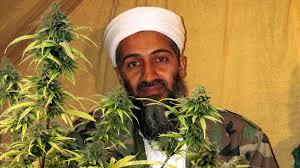 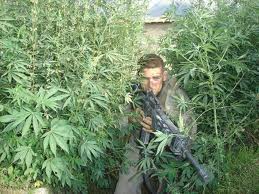 The Pakistani military set up a cordon around Osama bin Laden’s house today amid concern that it could turn into a shrine for jihadists.

Any person approaching within five miles was turned away by armed soldiers, who established sentry points across the surrounding fields. Locals were required to show ID cards to get to their homes.

Trucks were seen leaving the compound carrying away materials left by Bin Laden and the families – believed to include nine women and 23 children – who had lived there.

The show of force came as the Pakistani government faced new ridicule after a cannabis farm was found in the field next door to the compound. The marijuana plants were growing alongside cabbages and potatoes. Questions persisted about how the authorities could not have known who was at the site, which is 100 yards from a military training college.

It is the only building in the neighbourhood with CCTV cameras and barbed wire on top of its 18ft perimeter walls. Neighbours said those living there burned their rubbish to avoid collection.

Mashood Khan, a 45-year-old farmer, said: “People were sceptical about this place and these guys. They used to gossip, say they were smugglers or drug dealers. People would complain that even with such a big house they didn’t invite the poor or distribute charity.” Others told how the compound’s former residents had kept to themselves, offering explanations for their wealth that included the claim that an uncle ran a hotel in Dubai and they worked in the money-changing business. Bin Laden apparently depended on two men who would run errands for him or attend neighbourhood gatherings.

The previous day locals and reporters had been able to gain access to the hideout, revealing the squalid conditions in which Bin Laden lived. The paint was stained with mould and there was no air conditioning. Broken clocks, an old TV set, cooking pots full of lentil stew and children’s bikes were strewn around the courtyard.

The building has become the centre of global interest. Less than 24 hours after the announcement of Bin Laden’s death Google has earmarked its location on their maps.