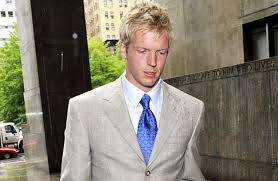 This is so stupid. -UA

It’s not often that you see a trial for marijuana charges (such issues are usually settled outside of court). But Chris Simms is in court declaring his innocence of his misdemeanor pot charge.

The Titans quarterback was arrested July 1, 2010 in New York after a police officer stopped him for making a “tire-squealing turn” just before a sobriety checkpoint in lower Manhattan around 1 a.m.

The officer claims that Simms’ Mercedes-Benz SUV reeked of marijuana and that Simms slurred his words, walked unsteadily and said there wasn’t any marijuana in his possession because “he smoked it all in the car.”

Simms passed an alcohol breath test but declined a urine test that could have shown whether he’d used any drugs.

Simms, 30, claims that the officer misunderstood him and that what he actually said was “the guy in the back seat smoked marijuana.” The guy Simms is referring to is friend Charles Granatell (a former quarterback at Bryant University, for what it’s worth).

Granatell is backing Simms’ story, saying Simms has never smoked pot in the 12 years they’ve known each other.

Granatell was asked in court why he didn’t tell police at the time of the arrest that he, and not Simms, was guilty of smoking the pot.
“I didn’t get the chance to. … (Simms’ arrest) happened so fast,” he said. “Go back and change it – I would if I could.”

Simms could face up to a year behind bars if convicted. In January, he turned down an offer to avoid any jail time by pleading guilty to driving while impaired, a non-criminal violation. His punishment would have included a $500 fine and five days of community service.