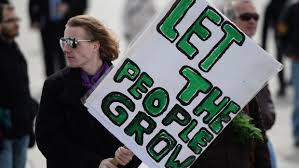 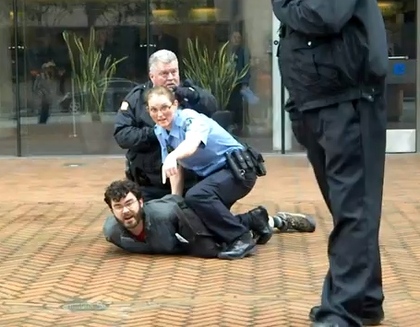 The United States federal government on Monday arrested two Seattle activists who were attempting to serve a cease and desist order on the Department of Justice in the wake of federal raids on medical cannabis dispensaries last week.

During the encounter, Mocek asked if the federal security guards were police officers, and they said they were not. Mocek then said he was leaving, and the security guard replied, “No you are not,” assaulted and physically detained him, and with the assistance of Homeland Security agents, dragged him into the Henry M. Jackson Federal Building on Second Avenue in downtown Seattle.

FOX Q-13 News was filming at the time the assaults transpired. CDC activists have footage as well, which has been posted to YouTube.

Mocek and West were released after several hours in custody, and issued citations for violating 41 CFR 102-74.385 — “Which we understand as a charge of obstructing justice,” said Ben Livingston of the CDC.

Despite the multiple charges of “obstructing justice,” the activists were able to serve their cease and desist letter on the Department of Justice and U.S. Attorney for Western Washington Jenny Durkan, as well as on the Drug Enforcement Administration.

Footage of two CDC board members detained and arrested by Paragon Security, one on federal property, one in the middle of an intersection in 2nd Avenue in downtown Seattle.