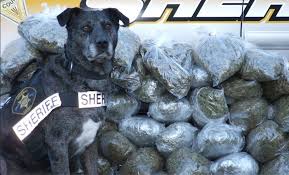 “I swears it wasn’t the dog, your honor…..I smelled  it myselfs…….” Way to stick it to big brother. Nice job Florida. -UA 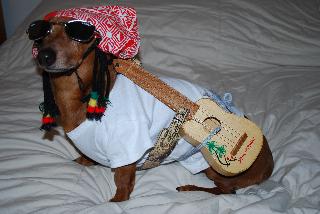 Economic reports are clear that South Florida’s third largest industry — after fabricating massive housing bubbles and churning out “I’m In Miami Bitch” t-shirts — is marijuana grow houses. One in every three homes in Kendall, in fact, is actually an empty shell full of sophisticated pot-farming equipment.*

So South Florida’s economy got some good news from the courts yesterday: Cops can’t use drug sniffing dogsany more to randomly smell around front doors looking for grow houses. Take that, Man!

The 5-2 ruling from the Florida Supreme Court says that police violated a defendant’s privacy when they took drug-sniffing dogs to snoop around his house without a warrant.

The defendant, 38-year-old Dade resident Joelis Jardines, was booked in December 2006 after police did just that. After their dog smelled pot outside Jardines home, the police got a warrant and burst in to find a pot-growing stash.

Using dogs outside a house is different than patrolling with them in a more anonymous environment, like an airport or train station, the justices said. Your right to privacy at home means a warrantless search causes “humiliation and embarrassment for the resident.”

Police tell the Miami Herald that the ruling will make it tougher to take down grow houses.

“It’s going to limit a tool we have in our arsenal of crime-fighting techniques,” Miami-Dade Maj. Charles Nanney tells the paper.

The Florida State Attorney’s Office plans to appeal the ruling to the U.S. Supreme Court.

Back in 2008, Florida passed California in total number of grow houses. More than 1,000 were busted last year, a 50 percent jump from four years ago.