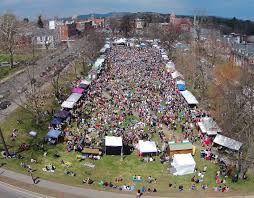 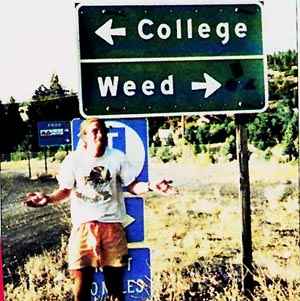 AMHERST # Chilly temperatures and gray skies did not discourage attendance at this year’s annual Extravaganja held on the Amherst common Saturday.

At the start of the festivities, rally organizers reminded the crowd that police would tolerate marijuana smoking only if it was confined to the common.

“Keep the grass on the grass, the police are respecting us so we need to respect them,” was the advice from the stage by CRC member Taylor Garron of New Bedford.

Police officers could be seen on the periphery of the Amherst common.

Event organizer Adam Freed said the CRC has about 150 members.

“Our group that is trying to reform the drug laws in Massachusetts and in the country,” said Freed. “This rally is to support and draw attention to the need for legislative change.”

Freed said more than 30 vendors set up shop at the event. While tents and booths selling food, clothing, jewelry, and water pipes circled the common, a sea of people stood shoulder to shoulder listening to local bands and speakers.

The keynote speaker was 1960s activist John Sinclair. Arrested in 1969 for selling two marijuana cigarettes to undercover police officers, Sinclair received a 10-year sentence. Memorialized in song by John Lennon’s “John Sinclair” on his “Some Time in New York City” Album, Sinclair was eventually released in 1971.

“I was involved in the first wave of those opposed to marijuana and I spent 2½ years in prison for it,” said Sinclair. “They have filled the jails and prisons with people like us all based on these ridiculous marijuana laws.”

Sinclair said that he is pleased with the work of the CRC.

“I am impressed with the UMass group and how the school has the sense to accept that this is a part of campus life,” said Sinclair. “Massachusetts has made some great strides toward decriminalization, but the struggle is far from over. In the end all we really want to do is get high and treat our medical illness and we don’t want to be interfered with by the police.”

According to Freed, the event is good for many local businesses. “Our event also supports a lot of the local business in the area. Many of them make a lot of money during Extravaganja,” he said.

“We decided to be a vendor here at the event because we had an incredible year last year at the store and were very busy with a lot of happy people wanting candy,” said Klass. “I like it. It’s very chill and it’s been a hopping day for business so far too.”

Jewelry vendor Robin Whitney of Adams said she makes it to the Extravaganja every year.

“This is always the first show of the year for me,” said Whitney. “I always do very well. It is a fun crowd.”

But despite the jugglers, hacky sack players, Hula-Hoopers and laid-back atmosphere, the event is not all about fun and games. Volunteers with the Massachusetts Patient Advocacy Alliance were on hand to gather support for the Massachusetts Medical Marijuana Act. “We are a grass-roots, volunteer-driven organization,” said organizer Matthew Allen. “We work with dozens of doctors, nurses and caregivers as well as patients suffering from things like Crohn’s disease, cancer and Lou Gehrig’s disease.”

Members of the group say that their focus is not on recreational marijuana.

“For us it is not about going out and getting high, it is about how medical marijuana can help people live with dignity and get pain relief without having to worry about prosecution,” said Erik Wunderlich of Roslindale. “It is criminal that you can be prescribed seriously addictive and dangerous pain killers, while a safe non-toxic scientifically proven analgesic is prohibited.”

Allen added, “We have more support behind this reform than ever before. We are very optimistic that the legislation will go through.

“Most people are supportive when they realize the multiple layers of state regulation that is involved,” he continued. “It’s not just about making marijuana available to anyone and everyone.”

Hundreds of young people continued to stream into the event throughout the afternoon.

“I just got back from Oxford University,” said Ally Jarvis of Ludlow, who is studying English and psychology abroad. “We heard about it on Facebook and I thought this would be a fun way to start my first week home.”

This year, for the first time, the event will continue for a second day from noon to 7 p.m. Sunday.