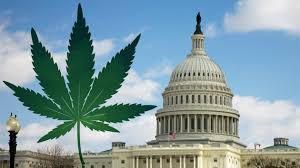 By Ryan Pike
The Hoya

The District will join 15 states in implementing a medical marijuana program full of stringent medical stipulations on Friday.

Only patients suffering from HIV/AIDS, cancer, glaucoma or multiple sclerosis who have a recommendation from a District-based doctor will be eligible for the medication, which will be distributed via a network of five dispensaries and 10 growing operations located within city limits.

Consumption will be limited to two ounces per month, per patient. Distribution of the drug will not begin immediately, and many of the details in the new program have yet to be hashed out.

“District residents suffering from painful conditions like cancer and HIV/AIDS will soon have one more option to help relieve their symptoms,” D.C. Mayor Vincent Gray said in a statement to DCist, a local news blog.

The measure will be published in the DC Register on Friday as emergency legislation, though a final version is expected within a month.

The legalization of medical marijuana has long been in the works in D.C. In 1998, 69 percent of voters approved a city referendum that would have allowed individuals to obtain and use medical marijuana at the recommendation of their physicians, but the measure failed to gain congressional approval.

In 2009 a similar proposal did pass through Congress, though the District did not begin to establish rules for the program until a year later. A draft of regulations for the program was eventually submitted to the D.C. Council in December but had not been implemented until now.

Some city residents have expressed frustration with the slow execution.

“To put this succinctly, we are very disappointed you have chosen to delay this program while thousands of District residents continue to suffer,” wrote Adam Eidinger, president of the District of Columbia Patients’ Cooperative, in a March 29 letter addressed to D.C. Major Vincent Gray.

On campus, Georgetown University College Democrats has participated in events about drug policy reform and sponsored an event with Law Enforcement Against Prohibition.

“I hope it will spark a meaningful discussion on campus about drug policy and reform,” College Democrats President Vail Kohnert-Yount (SFS ’13) said.

“Much of this movement has been hijacked by the pro-legalization movement in general,” he said.