Still not a contender for the school of hard knocks……..you can read million books, go to a thousand lectures and read a few websites, nothing can replace trial and success/error…..JUST GROW YOUR OWN! -UA 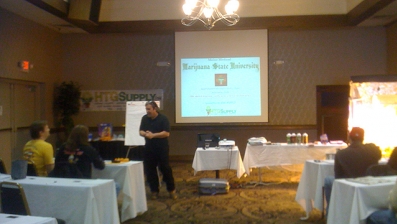 Ray Logan, center, said he launched Marijuana State University and its three-hour instructional courses to help friends and acquaintances who, like himself, use marijuana to cope with illness. (Logan)

Calling all “green” thumbs: A Maine man wants to teach you how to grow pot at Marijuana State University.

Ray Logan, 56, said he launched an instructional three-hour course to help friends and acquaintances who, like himself, use marijuana to cope with illness. Logan suffered a spinal injury during a skydiving accident in 1996 and later acquired a medical marijuana card in 2010.

“A lot of people just want to learn how to grow and it’s not an easy plant to grow,” Logan told FoxNews.com. “It’s not just sticking a seed in soil and that’s it.”

Logan, of Wells, Maine, held his first class on marijuana cultivation at a hotel in Portland on April 2. Roughly 15 people attended the session, which included germination tips and instructions on correct levels for humidity, temperature and lighting.

“I get right into every technical aspect of it that’s possible,” Logan said. “I’m still studying it. I love the biology of the plant.”

The classes also include information on the history of marijuana, details on various strains and instructions on how to grow marijuana using hydroponics, a method of growing plants using mineral solutions without water.

“We have over 30 years growing experience, not corn, not peas, just growing excellent marijuana,” Logan’s website reads. “A reference CD will be given to all participants with the information covered in class to be used as your resource and rescue for research and troubleshooting.”

While Logan says the courses are a way to instruct medical marijuana users to grow private stashes, they are open to anyone over age 21, including those who are not legally allowed to grow marijuana for personal use.

“My target audience is the medical patients,” he said. “Most of them are probably going to be in their 30s, 40s and 50s, not that some younger folks don’t get Crohn’s [disease] or epilepsy or other things that do qualify [for medical marijuana use]. But I’m not the police; I’m not there to see if they have a medical card or not.”

Police in Auburn, Maine, where Logan plans to hold his next class on May 7, told FoxNews.com that as long as attendees do not bring their latest cannabis creations to the class, there won’t likely be any problems.

“Right now, it’ll be given a low priority on our case assignments,” Deputy Chief Jason Moen of the Auburn Police Department said. “But anybody that might be there possessing a drug who does not have a marijuana prescription, thus making it illegal, that would be problematic for us.”

Moen, who was unaware of the upcoming class, said he would consult the attorney general’s office for further discussion on whether any prosecutions related to the courses would arise.

Prescription and limited possession of medical marijuana has been allowed in Maine since 1999 — and since 2006 in neighboring Rhode Island — but the state’s law lacked any distribution mechanism. In 2009, Maine later became the fifth state to allow medical-grade marijuana dispensaries, not-for-profit outfits to be licensed and regulated by the Maine Department of Health and Human Services.

The first such state-regulated dispensary on the East Coast was expected to be opened in late March in Frenchville, Maine, near the Canadian border, the Providence Journal reports. Three others are expected to open their doors by May.

Logan, who is not a licensed dispensary, said marijuana plants and associated paraphernalia are not used during the classes. He instead uses basil plants to mimic the more potent cannabis. To that end, Logan said he’s not worried about running into any legal problems.

“I spoke to an attorney and he said I’m fully covered under the First Amendment,” he said. “Some people may have an issue with it, but it’s a new time now. There’s always going to be someone who has ill feelings toward cannabis, just through a lack of knowledge about it or personal views against drugs. I hate to say it, but there are still people in the Dark Ages who don’t believe in research even if it’s put in front of them.”

Logan’s goal, quite simply, is to help those who need medical marijuana cultivate and produce bountiful plants.

“It is love and an adventure to watch this plant grow to its fullest, and it’s one of our favorite goals here at MSU,” his website reads. “Ray built his first [hydroponic] system in 1980 and has built, hmmm, well a few since!”