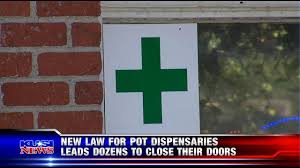 Spokane, Wash. — As the federal government works to close medical marijuana dispensaries in Spokane, many store owners are fighting back and keeping their doors open for patients.

“We’re of course nervous and upset as are all my patients,” said Charles Wright, owner of THC pharmacy

Wright said he serves more than a thousand patients every month and hopes he can continue to do so.

As the federal government works to close medical marijuana dispensaries in Spokane, many store owners are fighting back and keeping their doors open for patients.  KXLY4’s Annie Bishop reports. On Wednesday, Mike Ormsby, United States Attorney for the Eastern District announced a crack down on medical marijuana dispensaries.   Ormsby said the dispensaries are illegal under federal law. “When it comes down to it creates a climate of fear that is ridiculous,” said Wright

“My phone has been ringing off the hook all day, little old ladies crying and screaming. I’ve got people in wheel chair who are freaking out. These people can’t go out on the street and get drugs,” he said  In 1998, voters approved the use of medical marijuana in Washington without the fear of being criminally charged. Then, in 2008 lawmakers approved a law allowing medical marijuana users a 60 day supply of no more than 24 ounces and no more that 15 plants.But how the marijuana is bought and sold is vague and left open for interpretation.  Since 2008, nearly 40 marijuana dispensaries have popped up in Spokane County, serving several hundreds of patients everyday.   “We will keep the doors open as long as it seems reasonable,”said Wright    “Our patients are in tremendous need, we are going to do everything we can to support them,” he said.

Weylin Colebank owns Essence of Mother Earth in north Spokane and serves 400 patients a month.  Colebank said he too will stay open until the feds force him out.