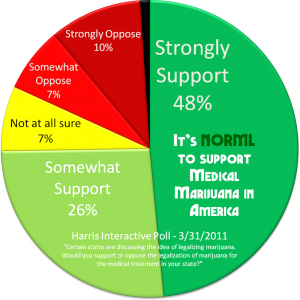 In 1976, Jamaican reggae artist Peter Tosh released his pro-marijuana anthem, “Legalize It”. And now, 35 years later, it appears a majority of Americans share Tosh’s sentiment — at least when it comes to legalizing marijuana for medical purposes.

Almost three-quarters of Americans favor legalizing the herb within their respective states for medical use, while just 18% oppose such a measure, according to a Harris Interactive poll released this past Thursday.

Recreational Use a Different Issue

When it comes to recreational use and jurisdiction, however, there appears to be far more debate among Americans. Of those surveyed, 49% opposed legalizing marijuana in their state for recreational use, compared with the 42% who came out in favor of it. Additionally, Americans were almost split on whether legalization should be a state or federal decision.Regardless, about three-quarters of those surveyed were convinced legalizing marijuana would boost tax revenue for cash-strapped states, with 51% saying there would be a “large increase” in tax funds from such a measure.

Medical marijuana has been legalized in 15 states, although recreational use hasn’t been passed. Last November, California put Proposition 19, which would’ve legalized recreational marijuana use in the most populous U.S. state, on its ballot. The measure lost by a 53-47 margin.

Medical marijuana generates about $1.7 billion in annual sales, or almost the same amount as Viagra, according to a March report released by independent financial analysis firm See Change Strategy. Estimates of the total U.S. marijuana trade have ranged from $20 billion to more than $100 billion.