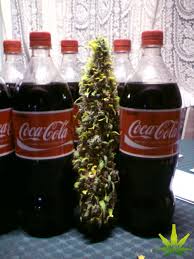 Does Coca-Cola have a corporate policy against putting Coke machines in medical marijuana dispensaries?

That’s the message delivered to award-winning Altitude Wellness Center a few days ago. But after AWC decided to go public with the rejection, Coca-Cola has backed down, with a representative pledging to apologize.

Here’s the story, shared with us by AWC owner Roger and his daughter, Melissa, who works there. Both of them ask that their last name not be used.

According to Melissa, an AWC rep put in a call to the local Coca-Cola distributor shortly after opening about a year and a half ago and requested a cooler to place in the business. Every month since then, the owners have paid between $200 and $300 for Coke to place in the cooler for giveaway to customers. More recently, however, they decided to swap out the cooler for a coin-and-bill-operated machine. With that in mind, Melissa sent the local Coca-Cola territory development manager the following e-mail on March 11:

We are currently doing business with you and we have a cooler for our coke products. We are thinking about changing to a machine that you have to put money in — instead of helping yourself like we do today. Do you have that kind of dispensing unit available and if so can you give me prices?Thank you

On March 14, the manager replied with the following note:

Hi Melissa,Unfortunately, Coca-Cola has made an internal decision not to place equipment at Marijuana dispensaries. Although, you already have a piece of our equipment I am not able process a work order for a new machine. I do apologize for that. If you would like me schedule a pickup of the cooler please let me know. Thank you.

This answer may strike some observers as ironic, especially given that cocaine was once among Coca-Cola’s primary ingredients. But the AWC crew wasn’t amused. As Roger says, “The state legitimized our business by collecting individual taxes and fees for licensing. The state’s collecting taxes, Denver’s collecting taxes. To me, that’s as legitimate as it can be.

​Adds Melissa, “We’re a nice, family owned, family run dispensary. It’s not an underground place with tunnels and black doors. And Coca-Cola is sold in bars — it’s probably sold in strip clubs, too. So why would it be okay to be in there and not in a completely legal medical marijuana dispensary?”

Melissa raised this issue more politely in her next e-mail to the Coca-Cola manager:

I was just wondering if there are any other business sector types that you do not place equipment in?

Here’s the response she received:

The folks at AWC waited for a couple of days. Then, after hearing nothing, Roger sent a note to Westword asking, “Were you aware that the Coca-Cola Corporation feels that the Medical Marijuana industry in Colorado is distasteful…???” He concluded the missive by writing, “We’d be remiss if we didn’t urge everyone that is involved in MMJ to boycott Coca-Cola, by not purchasing it in grocery stores and by refusing it at fast food places and movie theatres or anywhere else Coca-Cola has a presence… IF Coke doesn’t need us, do we really need Coke?”

After speaking with Melissa and Roger, I left messages for the Denver-based manager. In response, I received an e-mail from Michele McKillip, the vice president of public affairs and communications for the Northwest region of Coca-Cola Refreshments; she’s based in Washington state. In an interview earlier today, she confirmed that Coca-Cola has no blanket policy forbidding the placement of machines in medical marijuana businesses and would apologize to AWC for implying otherwise.

“There was a miscommunication, which we’re seeking to resolve,” she noted. “Our products remain in this establishment, and we will be working with our customers to continue meeting their needs. We always strive to provide the highest level of customer service and appreciate our customers’ business — and we will work with them” to resolve the situation to their satisfaction.

When told a short time ago about Coke’s change of tune, and the promise of an apology call from McKillip or another company rep, Melissa was pleased yet confused.

“It’s very good news,” she acknowledges, “but it’s frustrating to have to go through this with so many companies, from banks to credit card companies to Coke, when we’re a legitimate business. I don’t understand how they can single us out. We’re not breaking any laws and we’re paying our taxes.”

At least when they’re doing so in the future, they’ll be able to quench their thirst.